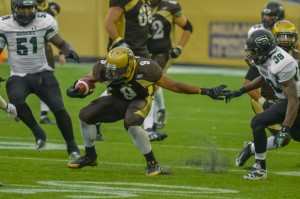 I chose to stay at home; there were also opportunities to see the field as a true freshman which was an aspect I was looking for. The offense fit my style of play and it seemed like the right overal fit for me.

My dad, he showed me what hard work is all about, and how starting from the bottom and using a well rounded work ethic to make you closer to the top is much more valuable than settling.

No, I have had a brief conversation with a scout from Green Bay, he told me to keep up the hard work, and to always work on my weaknesses. He also shared that he hopes everything works out for me and that hopefully we can cross paths again. I have talked briefly to scouts in the CFL and they rate me as a top 3 pick in the CFL scouting bureau.

I have played running back and quarterback.

The way I can read defensive coverage’s and use my speed and agility to break tackles and make plays in the open field. I am also very diverse in the way I can make a difference running the ball, catching the ball, or on special teams returning the ball.

I look for tendencies in coverage’s, who jams, who doesn’t, the weak spots of defenses and ways I can get open. I also look at the player who I will be going against one on one and see his individual tendencies to figure out ways to beat him in one on one battles.

Mike Edem off the University of Calgary Dinos, he now plays for the Montreal Alouettes. Akiem Hicks and Stefan Charles who both play in the NFL were tough players to play against as well.
If you could compare your play to one player in the NFL who would it be and why? Odell Beckham Jr. I’m a deep threat, and can also run good routes to get open and make catches to move the sticks. I am also diverse in returning the ball as well.

What was the biggest obstacle in your life you had to overcome, and how did you overcome it? Choosing which university to go to, I had to sit down with my parents and sort through pros and cons of the situation.

My speed and athleticism, I’m a player that will always make the first guy miss in the open field, and be a big play player.

I transitioned to receiver two seasons ago, so I still have a lot to learn.

I will work hard every second, every chance and every opportunity you give me and I will not disappoint.