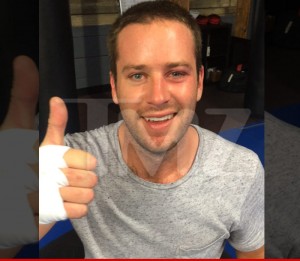 The Lone Ranger actor Armie Hammer stands at 6’5, and weighs 200 pounds, but wanted to spar with former NFL linebacker Shawne Merriman according to TMZ Sports.  Hammer and Merriman both train at Unbreakable Performance a gym in Los Angeles.

According to TMZ, the 28-year-old British star asked professional American football athlete Shawne Merriman, who used to play for the San Diego Chargers, to spar with him.

It’s claimed Armie has been training at Unbreakable Performance with owner Jay Glazer of Fox Sports for several months now.

Apparently Armie felt ready to spar with Shawne, who is 6’4” and 280lbs, this week and everyone at the gym was elated about the match.

We do not know who won the sparring match, but at the end of the day, with that shiner I would say Armie didn’t win….