Are the San Francisco 49ers faking? I expect a Chiefs win tomorrow 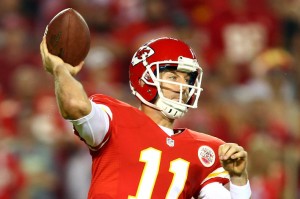 Alex Smith has never returned back to the San Francisco to play against the team that gave up on him.  Well this week Smith will return to the San Fran and his team is clicking on all cylinders.  The San Francisco 49ers have been in the news, but not for anything good. Deion Sanders is claiming that the players are giving up on their head coach Jim Harbaugh.  If that is the case it is another problem for the Niners.

The Niners will likely be without both Vernon Davis and Anthony Davis. Right tackle Anthony Davis (ankle, knee) didn’t practice this week and is listed as questionable. Jonathan Martin figures to start his fourth game in place of Davis, who missed the first three games of the season with a hamstring injury.

The Chiefs rank second in the NFL in sacks (12), while the 49ers have the fifth-worst sack percentage in the NFL. The 49ers have allowed a sack on 7.5 percent of their pass attempts.

The Chiefs have also been clicking now that Jamaal Charles is back. Last week Charles accounted for three touchdowns against the Patriots. Tight End Travis Kelce came on strong last week and Alex Smith looked good. While the Chiefs did lose Donnie Avery to a sports hernia, they have other weapons waiting to step up.  DeAnthony Thomas will be active and I expect him to be used in quite a bit of packages.  While the Niners are tough to beat at home, I feel this boat is sinking in San Fran.

Smith makes his return to San Francisco this Sunday, going against Kaepernick for the first time. Since being dealt, Smith has turned the Chiefs into a winner, leading them to 11 victories and a playoff berth last season while making the Pro Bowl. Smith has thrown for 891 yards and seven touchdowns while rushing for 103 yards this year. His rushing total is second among quarterbacks to Kaepernick’s 187 rushing yards.

I expect the Niners to lose 24-21 in the return of Alex Smith.