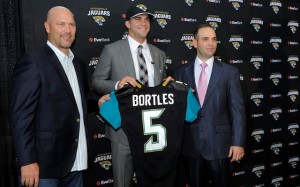 Blake Bortles has not been that bad as a rookie, but the former Central Florida standout needs to avoid turnovers this week against the Titans if the team wants to win.  Bortles has went three weeks straight throwing a pick, the only other quarterback to do that was Peyton Manning, who threw four straight games. We all know how that turned out.

NFL on ESPN    @ESPNNFL
Blake Bortles has thrown multiple interceptions in each of his first 3 games. The last QB to do that: Peyton Manning in 1998 (4 straight).

It is hard for a rookie quarterback to break down the defensive fronts, but when Bortles understands what he is looking at watch out he could end up smashing his competition.