Cowboys suffer a huge loss; Justin Durant done for the rest of the season 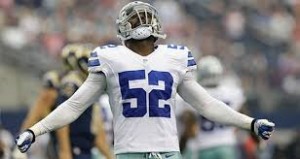 Justin Durant has been a leader on the Cowboys no-name defense. He is a captain for the Cowboys and has really been the glue of the defense, and now the Cowboys will lose him.

The former second round pick of the Jacksonville Jaguars has really stepped up this year.

“He’s in the top three or four performers we’ve had this year on defense,” Jerry Jones said.

The Cowboys will need fourth-round rookie Anthony Hitchens to step up alongside Rolando McClain and Bruce Carter. Durant has 49 tackles on the season and one interception.