Last year NFL Draft Diamonds brought the internet the most small school interviews of any website on the web.  We wanted to let our readers find out about players we believe can make it at the next level and succeed. Our first interview of the 2015 NFL season is Dean Marlowe, the intelligent safety from James Madison University.  We hope you enjoy the interview. 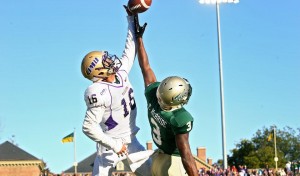 I had a few. Syracuse, University of Virginia, UConn, Maryland, Marshall, Maine, James Madison University and some other small schools.

I chose James Madison because of the location. I wanted to chose a school away from the city. The campus at JMU is beautiful, and it had a huge impact on my decision. It also helped that James Madison is known as one of the better FCS schools.

I am from Queens, New York

Who is your role model and why?

My role model is my Mother. My Mom is my lady. She has done everything for me. She put me in private high school and she has been there for me. She has not missed one college game over my career, she is very supportive.

Have you met with any NFL scouts, what are they saying?

I met with a Ravens scout, and he stated he was really looking forward to my pro-day. Tons of scouts have come to practice, but the coaches mostly field the questions.

Did you ever play any other positions in high school?

I always played safety, but I also played Quarterback and Safety as a Senior in High School and as a Junior I was the starting Wide Receiver and Safety.

My knowledge of the game is above average. I can play nickel back, I can play safety, I can play in Dime packages. I feel that is one of the differences that I have.

When breaking down film, what do you look for?

I look for tendencies, because every person in the world has habits. I look at tendencies of the lineman, the quarterback and the wide receivers. Overall, I look at kind of personnel groups they are using the most.

Who is the toughest player you ever faced?

I feel the best player I ever had to play against was in my Sophomore year going up against Tavon Austin of West Virginia. He was a very solid athlete.

I feel like Dashon Goldson. He can tackle well, and he has good vision as a safety. He is a big safety like myself, 6’2, 205 and he is not a one dimensional safety. He can play other positions in the secondary.

What is the biggest obstacle in your life you had to overcome, and how did you overcome it?

The biggest obstacle was probably the changing of coaching staffs over my college career. I have had several different positional coaches, different strength and conditioning coaches. It was a tough obstacle, because you have to figure out different schemes and different coaches ways of teaching.

Not really, I just get ready

Instinctive, I feel I can diagnosis a play, very quickly. I might be a little aggressive sometimes, but I am pretty good at understanding what play is about to be ran.

If I were a GM, and I gave you one second to sell yourself to me, what would you say?

Who was your favorite player growing up and NFL team?

My favorite team is the Philadelphia Eagles, and my favorite player was Sean Taylor. I am a huge Donovan McNabb fan as well. That is why I am an Eagles fan.

If you could have dinner with three people dead or alive, who would it be?

With your first NFL paycheck, what would you buy?

I would buy a car, after I get my Mother’ whatever she wants.