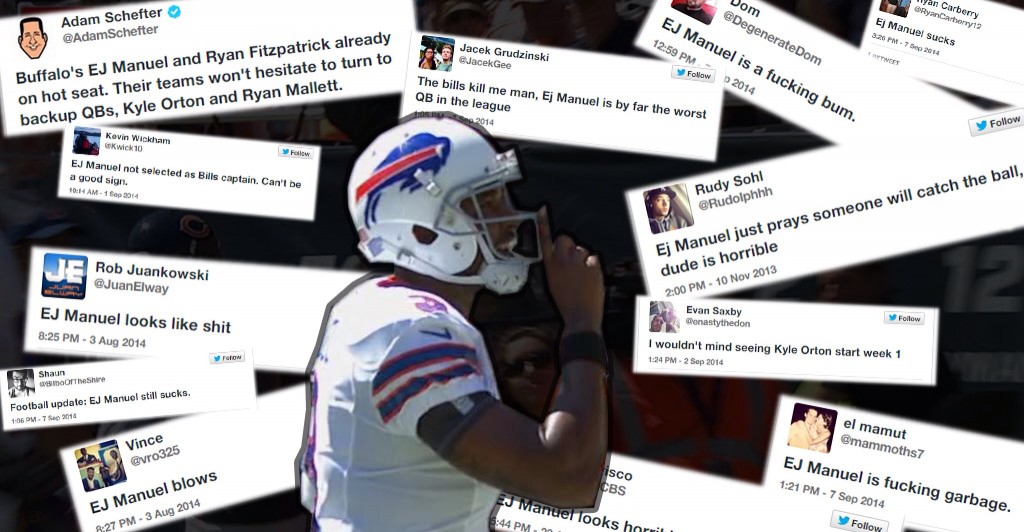 Yesterday an ESPN article came out that stated EJ Manuel took control of the locker room and he had the team pumped.

It started when coordinator Nate Hackett was speaking to his group, one that finished near the bottom of the league in several statistical categories this preseason.

“He told Hackett, ‘Hold on, I got something to say,'” wide receiver Robert Woods said of Manuel. “And he stood up in front of the whole offense. Had everyone’s ears about five minutes. Shut the whole meeting down pretty much. There was nothing else that needed to be said after he spoke.”

This comes a week after not being named captain of his football team, and having the media drag him because he was not a captain. Well It looks like you do not need a “C” on your chest to be a leader.  Many players went on to talk about EJ’s speech and it was really the turning point of the Buffalo Bills.

“We were fired up. We’ve taken a lot of heat lately. I think it all culminated in the past couple days,” center Eric Wood said. “I think we were kind of fed up with everybody talking about us as poorly as they were.”

“[He] just released what he felt about this offense and what we could do, all these weapons,” Woods added.

It was the first time that Dixon, who arrived as a free agent in the spring, has seen that side of Manuel’s personality.

“We fed off that,” Dixon said. “I’m looking forward to seeing that same person all the time now.”

“That just carried over today. He spoke to the team again,” Woods said. “The same energy, confident. He has everyone in this room believing in him, rocking with him.”

After the game I talked to a player that was in the locker room and he stated to me that it was truly what the Bills needed.  EJ took the stance of a leader, regardless of being a captain or not. He wanted this young team to know that they can win.  He stated, EJ looked like he had fire in his eyes.  The team knew right then and there they would fight for this young quarterback.  It was a huge win, and EJ Manuel played pretty darn well.

He notched a career high 72.7 percent completion rating against the Bears on Sunday, and was only a 58.8 percent passer his entire rookie season.  That is a pretty impressive stat. It looks like you do not need a “C” on your chest to lead your team anyway?