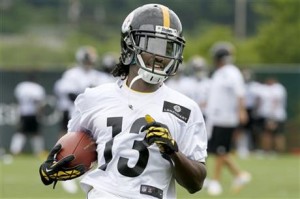 Dri Archer was the fastest player in the 2013 NFL Scouting Combine.  He has been elusive since college, and this week against the New York Giants he lit them up with a huge 46 yard screen pass. . It was just one play in a preseason opener, but Archer views it as his arrival moment.

Archer, a third-round pick in May’s draft, is the type of weapon Roethlisberger hasn’t had at his disposal during his career. Steelers coach Mike Tomlin has previously stated that Archer will be used in different spots on the field.

“I showed that I can play in the NFL,” Archer said, according to the Pittsburgh Post-Gazette.

I agree with Dri Archer, the guy is a beast.  He will be a special talent in Pittsburgh.  I love the way he moves and I feel he can be a star in the NFL.