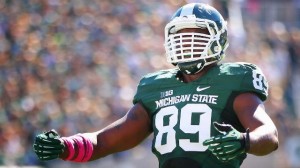 Cons:Little undersizedBulk upIncrease strengthGetting off the block against top tier Offensive lineman        Shilique Calhoun was widely considered one of the best defensive ends in action last year. After tallying seven and a half sacks last year he landed himself in the national spotlight. The Mighty Spartans defense was undoubtedly one of the elite defenses in NCAA Division I football in 2013. Leading the charge on the front line was Calhoun. He made impact plays all over the place helping lead his team to a 24-20 Rose Bowl win over Stanford on New Year’s Day this year.

Calhoun has a laundry list of areas that he excels in and just a few areas that need to be improved. If he continues to improve he will find himself being drafted in the 2015 NFL Draft 1st Round. Shilique has an amazing motor for a defensive end and seems to play through the whistle on almost every play. It is also rare that you will find an offensive lineman taking him out of the play. He keeps fighting throughout the play and that determination makes him the beneficiary of late play tackles and sacks.

Calhoun is a slippery end that makes it hard for the opposition to get their hands on them and keep them on him. As the play comes to him he often is able to get loose from an engaged block and make a play on the ball. He has good finesse moves getting to the quarterback. He is an effective stunt player because of his speed. When he gets over the top he is gaining speed and often meets a lineman on their heels, which is a battle he is almost always going to win. There is no doubt that he will need to bulk up and add strength to build on last year’s success. With that being said he still is able to hold the line and push back the lineman at times.

One of the most impressive aspects of Calhoun’s game is his nose for the ball and ability to stay home. He does a great job of containing as well as chasing runners down the line of scrimmage to make a play. His speed and quickness allows him to make plays on the edges of the field against quick quarterbacks and running backs.

There are a few different areas of his game where he needs to develop. As stated before he has to increase his weight without losing and speed, which can prove to be a difficult task. Increasing his strength can add more versatility to his game making him more of a headache for offensive lineman to guard. Finally, Calhoun performs above average against lower tier to mid level teams. He has struggled at times against elite lineman like Taylor Lewan. Considering these are the type players he will see every week in the NFL it is an area of concern. This is not to say that Calhoun does not have the ability or did not still have an adequate game against these tougher opponents. He will just need to find a way to be a standout in games against the best talent the game has to offer.

Shilique Calhoun is a fun player to watch exploding off the line, using quickness and spin moves to beat lineman. It will be exciting to see what he is capable of after an offseason of working out and watching film to build on a strong 2013 season.SCORE 87