Linebackers are getting roughed up so far in 2014 NFL season 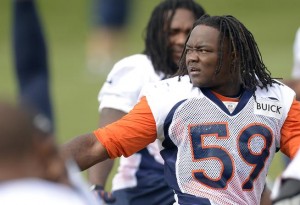 Linebackers take the most damage of any football player in my opinion, and in 2014 that damage is showing.  So far linebackers are dropping like flies.

Yesterday Danny Trevathan was lost for up to 6 weeks with a broken knee.  He is not the starting linebacker to go down, and probably will not be the last, but these linebackers are taking the blunt of the long preseason so far.

Kiko Alonso of Buffalo, Jon Beason of New York Giants, Sean Lee of Dallas, Sean Witherspoon of Atlanta and now Danny Trevathan have all been lost for at least six weeks.  All are starting linebackers for their teams, but the problem is there are not too many players available in the pool.

Trevathan is confident he will be back

“They told me that my ACL and MCL are fine, but that I have a fracture in my knee,” Trevathan told ESPN’s Josina Anderson. “The doctor told me I was going to be out four to eight weeks, but I told him four to six. I’m not tripping. I will bounce back. I’m a soldier.”

Trevathan immediately grabbed for his knee and was down for several minutes before he was taken to the locker room.

“He’s got an impact fracture, which is basically a crack, high on the tibia,” said Broncos head coach John Fox following Tuesday night’s practice. “They’re saying four to eight weeks. It could have been ligament damage and all that kind of stuff, it was not.”

Shaquill Barrett and Lamin Barrow could be called to fill the void. The only real people available are Jonathan Vilma, and Ernie Sims.