Inside the War Room: Safety Edition 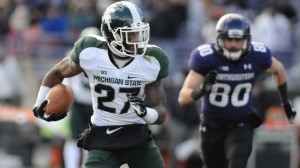 Inside the War Room: Safety Edition

In this week’s Inside the War Room I look at the top safeties and kickers in the draft, name this week’s prospect of the week, and much more.

Drummond is a big natural athlete who recorded 91 tackles, and four interceptions last season. I think his best fit in the NFL will be as a strong safety due to his aggressive playing style.

Shaw is another good size defensive back who has a bright future in the NFL. Unlike, Drummond though Shaw is better in coverage then in run support having started 11 games at cornerback last season.

Richards is one of the better athletes in the draft, and his stock would have been much higher if he was an inch or two taller.

Cox is a hard hitting defensive back who will make the transition from cornerback to safety in the NFL. He only started one game last season, so he will have to prove he can hold up vs. top-level competition on a weekly bases.

Smith is another ball hawking safety in this year’s draft class. He has more career interceptions than any player in FBS football with 14 picks. His lack of great size is the only reason he is this low on my draft board.

Cooper is a big safety who excels in run support leading Nebraska in tackles last year with 91 tackles. I would like to see him more productive in coverage since he only recorded one interception and one pass breakup last season.

Terry is one of the top small school safeties in this year’s draft class being named to Inside the War Room’s All-Small School Defensive Team, and he already has several NFL teams inquiring about him.

Specialists to keep an eye on

One of the most overlooked positions in football is kicker and punter. In the 2014 NFL Draft we saw two kickers, and one punter drafted with the first player going off the board in the sixth round when the Chicago Bears drafted Pat O’Donnell in the sixth round.

This year’s kicker class is led by Notre Dame’s Kyle Brindza who made 77% of his field goals including three field goals of over 50 yards. He kicked off for the Irish as well and 47% of his kickoffs went for touchbacks, so he defiantly has the leg to kick in the NFL. Another kicker who could get drafted this season is Michael Hunnicutt of Oklahoma. Hunnicutt made an impressive 89% of his field goals last season, although his longest field goal was only 47 yards.

The top punter in the 2015 draft class is Spencer Ross of Baylor. Last season Ross averaged 46 yards per punt, and had four punts of over 60 yards. He also kicked off last season and led the Big 12 in kickoff average averaging 45.7 yards per kickoff. Michigan State’s Mike Sadler is the second rated punter on my board. Sadler was named first team All-American by ESPN last season after averaging 42.5 yard per punt. He also placed an impressive 43% of his punts inside the 20 yard line. A couple of small school punters to keep an eye on this season are Kyle Loomis of Portland State, and Matt Klingler of St. Ambrose.

Prospect of the Week

One of the most talented defenses in college football last season was Florida State, which was a major reason why the Seminoles won the national championship last season. However, the Seminoles lost two outstanding defensive backs to the NFL in Terrence Brooks and Lamarcus Joyner. The man who is expected to fill these players’ shoes is this week’s Player of the Week Tyler Hunter.

Hunter missed all but three games last season with a neck injury which he suffered vs. Bethune-Cookman. This neck injury was caused by a condition called cervical spinal stenosis which is a narrowing of the spine near the neck. He still played a significant role on the Florida State team though acting as a coach on the field. He helped teammates such as Terrence Brooks have the best season of his career, and also mentored several younger players. Hunter also spent a ton of time in the film room, and Jimbo Fisher told ESPN that he can’t recall a player spending more time in the film room on their own time then Hunter. This season Hunter will be looked to provide leadership to a young defense that looks to repeat last year’s success.

When looking at Hunter as a prospect the first thing that stands out to me is his coverage ability. He tied for the team led in interceptions in 2012 with 2013 first round draft pick Xavier Rhodes with three interceptions. In coverage he shows good agility, and has very good change of direction skills. Hunter has good quickness as well, and shows nice closing speed which is the main reason he has been able to be such a ball hawk in the secondary. I am also impressed with the mentality Hunter brings to the game. He is one of the hardest workers on the Florida State football team, and is a proven leader who leads with both his strong work ethic and overall football intelligence. One more positive with this prospect is his kick return ability. In 2012 he averaged a very impressive 15.8 yards on eight punt returns.

The biggest concern with Hunter is his medical history. The fact he missed all but three games last season with a serious neck injury is a major concern. He has also battled a knee injury during his time at Florida State, although this injury did not cause him to miss any games. He lacks the size and strength to be a great defender vs. the run as well. In 2012 he only recorded 26 tackles, and last season in the three games he played in he only recorded eight tackles.

While Hunter is only a junior he is defiantly a player worth keeping an eye on. I love his approach to the game, and he defiantly has the ability to cover in the NFL as a free safety. However, to earn a high draft grade he must stay healthy for the rest of his time at Florida State, and also prove he can be a force vs. the run and have an impact covering kicks on special teams. I think it is in Hunter’s best interest to stay at Florida State for the next two seasons, since he currently carries a fourth round draft grade on my board.

USC OG Aundrey Walker is not recovering very quickly from his fractured ankle he suffered last season. … Look for Richmond QB Michael Strauss to split time with Michael Rocco. … Nebraska RB Ameer Abdullah has been practicing as a punt returner. … Duke TE Braxton Deaver tore his ACL, and will be out for the year. … Auburn S Robenson Therezie might miss the season opener due to eligibility issues. … Missouri has moved RB Marcus Murphy to wide receiver. … Tulsa WR Keyarris Garrett receiver a medical redshirt for the 2013 season due to a broken leg, and will only be a junior this season. … In a bit of a surprise move Michigan State did not name quarterback Connor Cook a team captain.