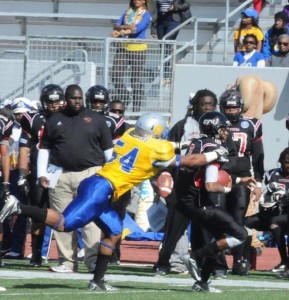 NFL Draft Diamonds has teamed up with Joseph Muia a very solid up and coming scout, to put together a series for our readers called Get to Know. What this series will do is allow you to be a featured on our site, whether you are a freshman or a senior in college. This is a series to help get players at any school gain exposure.  We always strive to assist players that have the passion to make it to the next level.  So we hope you enjoy our series called GET TO KNOW. Today’s Get to know series will focus on Jamal Qadir the mean, hard hitting linebacker from Albany State University, and we feel at NFL Draft Diamonds, you will want to know all about him.

AKA: My coaches call me Qadir

Best On-Field Performance: Tackling the QB and stripping the ball causing a fumble late in the 4th quarter against ECSU

Football Mentor/Inspiration:  My cousin Fred Smalls that played in the NFL with the Eagles and Chargers

Funniest Football Memory: Tripping over my own feet before I could attempt to make the tackle in middle school.

Football Philosophy:  Just to play and give it all to god and not try to think pre snap and just go hard, sideline to sideline.

Career Goals:  I want to make it to the NFL and have a successful career, or I”ll get a job with a company or work at Microsoft.

Player You Model Your Game After: Luke Kuechly because he is a hard worker

Who Will Win The Super Bowl: I like the Seahawks again just because of LOB

What Would You Want College Football Fans To Know About You: I just like to work hard, that’s what my coaches instilled in me.

Make sure you follow Joey on Twitter @Joey435686 and if you want to be considered for our Get To Know series, contact us and lets get you a little more exposure.