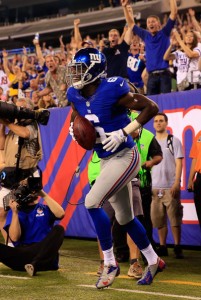 It is not about how many snaps you get in the pre-season, but it is what you do with the snaps – That was my quote this morning on twitter. There is one player that has really made an impression in the pre-season.  That player is Newberry College’s own Corey Washington.

Washington was signed by the Arizona Cardinals as an undrafted free agent after the NFL Draft. Washington spent time in camp with the stacked Cardinals receiving core, and was eventually released, because the team drafted not one, but two wide outs.  Washington was quickly signed by the New York Giants, and the rest is history.

Coach Tom Coughin said “it’s an important thing” to see Harris and Washington work with the first team. This is likely the last chance in preseason action. Based on what we saw in practice this week, they will get their opportunities, in lieu of Jerrel Jernigan. It’s an opportunity for Harris and/or Washington to secure their spot on the final 53-man roster.

Washington is going to make the Giants roster, and if he doesn’t expect him to be on some NFL team.