Former Browns draft pick died at the age of 77 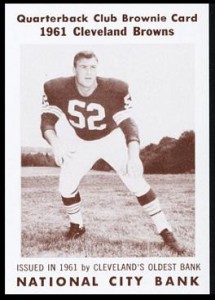 Dave Lloyd a former Cleveland Browns middle linebacker and kicker passed away today at the age of 77. Lloyd grew up in Gladewater, went on to play 12 seasons in the National Football League and later returned to East Texas where he owned and operated a construction company, died on Saturday at his Gladewater home.

He was drafted in the fourth round of the 1959 NFL draft by the Cleveland Browns, and played 38 games over three seasons with the Browns before playing one year with the Detroit Lions and finishing his career by playing eight seasons with the Philadelphia Eagles.

A middle linebacker and kicker, Lloyd played in 157 career games — finishing with 14 interceptions and 13 fumble recoveries. He played in one Pro Bowl during his career.