Could Chargers sixth round running back Marion Grice be cut? 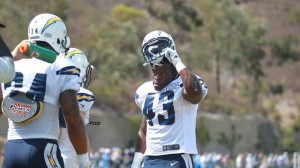 Kevin Acee of the Union Times San Diego predicted the San Diego Chargers roster after their first pre-season game and there was one LITTLE surprise.  In his prediction, he had the team cutting their sixth round pick Marion Grice and keeping Brandon Oliver the small running back from the University of Buffalo that went undrafted

Grice only racked up 35 yards on 14 carries in San Diego’s preseason opener, while Oliver the mini back pounded the first and second team defense of the Cowboys for 60 plus yards and a touchdown.  Oliver really is impressing and if he can keep it up he could be a huge steal for the Bolts.

The Chargers could hope that by releasing Grice the team can stash him on the practice squad.