Is Odell Beckham a good fit for the New York Giants? 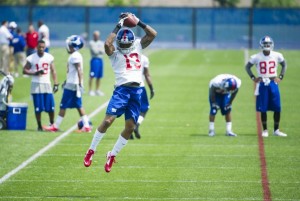 Is Odell Beckham a good fit for the New York Giants?

Eli Manning endured possibly the toughest season of his career in 2013. He threw for a career-high and league-high 27 interceptions and was sacked a career-high 39 times. The Giants limped out of the gates, beginning the season 0-6 and endured injuries on both sides of the ball. Despite the slow start, the Giants finished the season 7-9 but couldn’t outrun their problems on the offensive side of the ball. With the 12th overall pick of the 2014 NFL Draft, they selected standout LSU wide receiver Odell Beckham Jr. to elevate their passing game and give Manning another weapon in his arsenal.

The Giants offense was an abysmal 28th in the NFL last season and lacked playmakers. Victor Cruz failed to reach 1000-yards receiving after two straight campaigns of passing that mark. Hakeem Nicks, a former first round pick, struggled and didn’t catch any touchdown passes. He lacked the top end speed he showed earlier in his career and was not brought back. Odell Beckham, Jr. will be relied upon along with Reuben Randle to give Manning a three-headed attack on the outside.

Beckham, Jr.’s biggest strength is his versatility. He was named the Paul Hornung Award winner in 2013, given to the most versatile player in college football. He broke the LSU single-season record for all-purpose yards with 2315. He is not strictly an outside or inside receiver. He is both. Beckham, Jr. possesses excellent speed as a vertical threat, running a 4.38 40-yard dash. He has good hands and will see plenty of time working in the slot. The Third Team AP All-American should also see time as a punt returner where he excelled at LSU. He returned two punts for touchdowns in his career and in a game against UAB last season, he returned a missed field goal for a 109-yard touchdown. Beckham, Jr. has experience in a pro-style offense and the transition to the pros will not be difficult. Also in Beckham’s favor are his genes. His mother was an All-American sprinter and his father played football at LSU.

The Giants didn’t have a receiver over 1000 yards in 2013 and no rusher reached the 500-yard mark. The offensive line was a mess and nothing went right on offense for New York. Beckham, Jr.’s addition should take some pressure off of Cruz and allow him to see less double teams. It should also open up some holes in the running game which ranked 29th in the league last season.

New offensive coordinator Ben McAdoo is expected to open up the offense and be more creative. The Giants lacked big plays in 2013 and Beckham, Jr. should provide that spark. He has proven himself at the highest level in college football and should make an immediate impact in multiple areas. The versatile wideout could even be the missing piece to push the Giants back in the playoffs after missing them the past two seasons.

Ron is the lead editor of FantasyFootballOverdose.Com – prime source of NFL news and rumors. You can follow his NFL updates at this Facebook page.