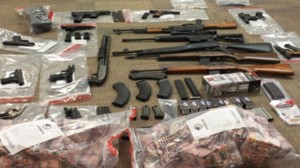 Police arrested two men as part of a large heroin bust on Mount Washington.  The house

belonged to former NFL player Deshea Townsend.  Deshea was renting the house to a tenant according to multiple reports, but this amount seized in this drug bust, is enough to really control a large portion of the Pittsburgh Area.

According to the Attorney General’s Office, two men were arrested at a home on William Street.The suspects have been identified as 33-year-old Price Montgomery and 35-year-old James Perrin.  Law enforcement and the DEA seized 1,500 bricks of heroin (75,000 stamped bags), 16 firearms, more than $100,000 in cash and jewelry, two luxury vehicles, Cuban cigars and a live chicken.

I don’t know is Townsend will be in trouble for this incident, but if he truly did not know that his tenants were selling drugs, he should be fine.  Still this is a bad situation for the former Steeler.