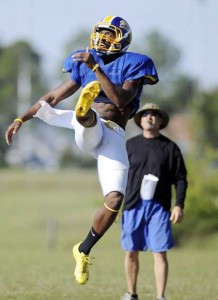 One player on the Raiders roster that will be due a BIG BOY pay raise is their punter Marquette King.

Let’s go back in time for a minute and I take you the HBCU Bowl. Scouts were taking the field on a early morning session, and they were all talking amongst themselves, when they began hearing a BOOMING Noise.  It wasn’t just once, it was one after another.  It was about 10 straight.

One NFL scout stood up and looked over and behind them was a kid that looked like a wide receiver, standing 6’2, 200 plus pounds, and was built like rock.  The NFL scout watched this kid punt another Booming kick, and by the time he pulled out his stop watch and hit it, the ball was already about 20 yards in the air, he stopped it when it hit the ground and he has a 4.8 hang time.

All the NFL scouts turned around and they were cursing saying “Holy S&*t this kid is amazing”.  The next punt was a 5.04 hangtime, and the next five punts were all over five.  The NFL scouts surrounded this young black man named Marquette King formerly of Fort Valley State University.  The NFL teams began talking to him, and let’s just say he stole the show.  The practice went on for the HBCU team that morning, but King had NFL scouts drooling over his intelligence and country twang.

The draft came and went and King did not hear his name called, just like most punters that have the talent. Instead, he was given an opportunity to play behind Shane Lechler in Oakland.

King the Georgia boy, has always been about working hard.  I remember talking to him his rookie year, and asking him about his goals.  He had one goal in mind and that was to make the team.  He had a very steep challenge though.  He was competing with Shane Lechler, the best punter in the NFL the year previously.  King ended up in preseason getting injured and he landed on the I/R.  Who would have thought that King would continue to work hard to get back from his injury, and become the NFL’s best punter?

Well after sitting out a year, the team elected to let Shane Lechler walk via free agency, basically handing Marquette the key to the car.  That was before the team brought in Chris Kluwe to compete with King.  King beat out the former Minnesota Vikings punter, and continued to shine.  Last year King tore it up in Oakland, averaging a 48.9 punting average in his first ever season. The guy nailed 1/4 of his punts inside the 20 yard line, and his season long was 66, which had a monstrous hang time.

Since last year, King has been working on his angling, and his hangtime.  He was at Kohl’s kicking camp competing a few months ago when he hit a punt with a 5.6 hangtime.  That is ridiculous when the average punter averages about 4.3.

King is not done yet though,  he will continue to be an underdog.  He currently is the lowest paid starting punter in the NFL making 480,333 dollars.  To make it sting a little worse, King is making less than the guy they brought in for competition a few weeks ago.

His back-up is  making 30 thousand more than he is, but if King has another year like he did last year, the Raiders better pull out their check book.  King is the next major phenom at the punter position.  One thing we all know is that Country Boy from Georgia will not be the lowest paid punter for long, because the same way he had to work to beat out Shane Lechler and Chris Kluwe he will earn his check.

The best part about coming from a small school is the players already know what a struggle is.  They don’t have people handing them anything, everything in life they have to earn. That is why they are prosperous when their opportunity arrives. Marquette is a very close friend of ours at NFL Draft Diamonds, and we are wishing you the best of luck in 2014 Marquette.  Kick SOME BALLS out there #KICKSquad #TeamDiamond.