A Look Back at Ohio State University: Terrelle Pryor saga 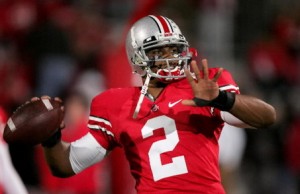 A Look back at Ohio State/ Terrelle Pryor Saga
For years, the NCAA has battled numerous controversies and questions, regarding on how they punish their participants. In some eyes, punishments directed at players and personnel are viewed as too harsh; on the other side of the spectrum, some believe that punishments towards participants aren’t harsh enough. In this unique case, you could make the argument that this punishment benefited both parties and still saved the program from tremendous revenue losses.
In December of 2010, Ohio State quarterback, Terrelle Pryor and four teammates were suspended by the NCAA for the first five games of the following season for selling championship rings, jerseys and awards.  They were also suspended for using their public persona to get discounted items (most notably tattoos).  What makes this story so unique is that the verdict for their punishment came down days before their BCS matchup against Arkansas, but the suspension didn’t include that game. Another nugget that made this story so comedic is that Terrelle Pryor knew that he would miss the first five games of the following season (which would negatively affect his draft stock), so he bypassed his senior year and declared for the NFL draft. His decision to go pro, made NCAA officials look completely silly, but at the end of the day, the powers that be protected their bowl investment by letting their star players play in the championship game.
This is where I have a problem with this “punishment”.  As a sports manager and high authority of this program, why would you let these players play in a championship game, when they indubitably broke NCAA rules? The main reason why I don’t take the NCAA serious is that they value the dollar sign and any type of profitable gain over doing the right thing. Whenever there is an opportunity to make money, the NCAA will do whatever it takes to accommodate that gain, rather than set an example and punish the guilty. BCS board members knew that if they suspended those star players, days before a big championship game, they would have lost out on millions of dollars in ticket sales, merchandise, sponsorships, etc.
According to Dan Wetzel, sports columnist of Yahoo Sports, the two teams that participated in the Sugar Bowl can earn up to 17 million dollars! What makes this story even more interesting is that Big Ten Commissioner, James Delaney, controls a substantial amount of power with regards to the BCS.  Twenty five percent of the U.S. households are in the geographic region covered by the Big Ten Conference. This made major implications on his influence over college football. So to put this puzzle together, star quarterback Terrelle Pryor, Dan Herron, Mike Adams and DeVier Posey all play for Ohio State which is in the Big Ten Conference. The Big Ten Commissioner is James Delany (who also has influential power in the BCS and surrounding regions in the upper Midwest and Northeast part of our nation).  If someone told me that Mr. James Delany pulled a couple strings and convinced the powers that be to delay these suspensions; I wouldn’t be surprised!
Suspending players for the following year when you have the opportunity of suspending them before the championship sends a message saying that “It’s ok to break the rules because we’ll make accommodations for you if it helps us make even more money”. It’s a joke and I find it completely hilarious that the NCAA finds this acceptable     This type of disciplinary action is meager to say the least. When you start allowing unacceptable behavior, disregard of rules, regulations and procedures in society, it creates a weak governing body. The people under those rules and regulations start to lose respect for authority. This story in particular taught me that you can do the crime and not necessarily have to do the time, if money, power, and greed are involved.
This piece was written by NFL Draft Diamonds writer Frank Cooper.  Frank has worked with the Buffalo Bills and is still working to be a GM in the NFL.
Do you like Ohio State?  Do you ever go to the games? If so use Ticket Monster and save, they’re our partners.
Related Topicscollege football ohio statenfl draft news ohio statenfl draft ohio state terrelle pryornfl news ohio stateOhio StateOhio State Buckeyesohio state nflohio state nfl draft