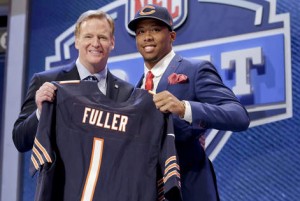 Sports Ruckus writer Justin Walters has graded the entire NFC North, and some Bears fans might not like his grading, but he has some very valid points.  Let’s see what the Bears finished with.

The Team from the Windy City needed some upgrades on the defensive side of the ball as the offense carried the team close to a playoff spot last year.  The Bears strengthened the middle of their D line with 2 big bodies and added a top CB that fits their style and an athletic safety to compete with the aging group currently in the secondary.  The Bears did a good job drafting as they look to overtake the Packers in the NFC North.  Adding another O lineman or an extra receiver in a strong draft at those positions wouldn’t have hurt either though.

Kyle Fuller CBEgo Ferguson DTWill Sutton DTKadeem Carey RBBrock Vereen SDavid Fales QBPat O’Donnell PCharles Leno OTFuller is a tough CB that does a little bit of everything and is physical for his sizeI like both DTs , they both should step in and contribute right awayCarey is an elusive receiving back to sub in for Matt ForteVereen has ability and could help at safety or slot CBDavid Fales will come in and compete to be Cutler’s backup

Do you buy Bears tickets? If so you can save money by using Ticket Monster.  We teamed up with Ticket Monster to save our readers money. Check it out.