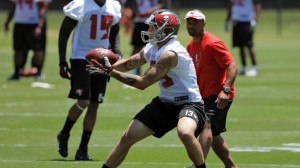 Sports Ruckus writer Jessie Peel has graded the entire NFC South, and while some Bucs fans might not like his grading, he has some very valid points.  Let’s see what the Buccaneers finished with.

These aren’t your dad’s Buccaneers (and thank God because NO ONE looks good dressed like a creamsicle-YOU HEAR ME BERMAN!?) but if they keep drafting like this the fans will commandeer that cannon and shoot the owner with it. With their first pick they decided to go a bit “splashy” and pick Johnny Manziel’s security blanket WR Mike Evans.  Many compare him to current Bucs WR Vincent Jackson-and I can see the comparison: both tall and have the same complexion.  That’s where it ends.  Evans can leap over smaller corners to get the ball and is pretty strong when fighting for it but lacks the ability to run crisp…or for that matter any… routes.  Now that may change with NFL coaching and an accomplished route-runner like VJ showing him the way.  Second round pick TE Austin Seferian-Jenkins is a great selection for McCown or the Jeep from Popeye AKA Mike Glennon-whoever’s slinging the ball back there. Here’s where the gum loses its flavor: 3rd rounder RB Charles Sims is NOT beating out Bobby Rainey let alone Mike James on the depth chart, G Kadeem Edwards is a third stringer at best and then they must have turned over the controls to someone’s kid because I could’ve sworn I heard SpongeBob got drafted in the 6th round. (Just kidding Herron, you’ll play some slot)

Are you a Tampa Bay Buccaneers fan? Do you buy tickets?  You can save money by using Ticket Monster, see how much you can save here.