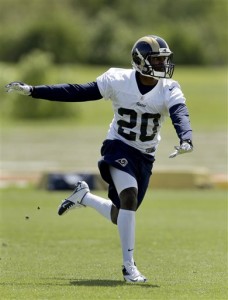 Sports Ruckus writer Justin Walters has graded the entire NFC West, and some Rams fans might not like his grading, but he has some very valid points.  Let’s see what the Rams finished with.

The Rams needed a big draft and boy did their front office deliver.  As QB Sam Bradford goes into his put up or shut up year he can thank RG3(trade for 1st rd pick) for providing him with Greg Robinson, the mammoth human being who will be playing somewhere along the offensive line.  Robinson is an excellent run blocker who has a lot to learn when it comes to pass protection but for a team that plans on playing a physical brand of football he is a perfect fit.  I can’t argue with the pick, even though I would have liked to see Sammy Watkins as the pick. With their 2nd first round pick The Rams went back to the future. Not the “Greatest Show on Turf”past, I am talking the “Fearsome Foursome” when they took Pitt DT Aaron Donald, giving them possibly the best front four in the the game.

As days 2 and 3 came St. Louis continued on making good picks and improving their team. Lamarcus Joyner has been called “A poor mans Honey Badger” which where I am from is definitely cause for a Deacon Jones head slap. Joyner is a versatile player who makes game- changing plays whether it’s at CB or safety.  In conclusion the Rams had a great draft, added a lot of talent and look ready to take the next step which would be finding their way into the playoffs.Greg Robinson OTAaron Donald DTLamarcus Joyner S/CBTre Mason RBMo Alexander SEJ Gaines CBGarrett Gilbert QBMitchell Van Dyk OLCB Bryant SMichael Sam DEDemetrius Rhaney CRobinson is an enormous athletic road grader who is a dominant  run blocker.Donald was definitely the best DT in the draft and a top 10 player in this draft. He is an aggressive DT who penetrates the gaps and makes plays in the backfield.Joyner is a playmaker who will find his way on the field whether as a safety or in the slot as a nickel back.Mason is a physical runner with the ability to take it the distance.  He is good enough to get carries early.Gaines is a solid cover guy who could turn out to be a steal for a 6th rd pick.Alexander is a big time hitter at safety but coverage is questionable in coverage

Are you a Rams  fan?  Do you ever buy tickets to the game? If you are planning on buying tickets you can get them cheaper by using Ticket Monster.  Check out their site and save big.