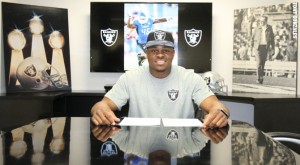 Sports Ruckus writer Jose “Gor” Rosario has graded the entire AFC West, and while some Raiders fans might not like his grading, he has some very valid points.  Let’s see what the Raiders finished with.

Everytime the Raiders were on the clock every no name college player with 4.3 speed had his fingers crossed and waited to hear his name called. Well I guess it’s a new day. Oakland had a plan to go with, need and depth. In a draft with so much talent the Raiders could do no wrong at #5. They play in a division with some pretty good QBs Manning,Rivers and Smith so it was pretty easy to go defense. With arguably the best overall player and defensive player they went with Khalil Mack. NO BRAINER!! Second round was just as big. With a need at QB Raiders go with who I feel is the best QB in the draft Derek Carr. Best pure passer and a big bro who groomed him not to make the same mistakes as him, he’s had a luxury no other prospect has. G. GABE JACKSON- A 2-time all american bull dozer, DT. JUSTIN ELLIS- A run-plugger who can play Nose and D Tackle, CB- TRAVIS CARRIE- A speed guy (4.45) can contribute right away, he was an all MAAC punt returner, DE. SHELBY HARRIS- Can play DT as well. Good player only knock is he had some behavioral issues early in college, S. JONTHAN DOWLING , Big player 6’3″ who has great ball skills and forced 6 fumbles. Take a bow Raiders, you no longer are the weakest link!

Are you a Oakland Raiders fan? Do you buy tickets?  You can save money by using Ticket Monster, see how much you can save here.