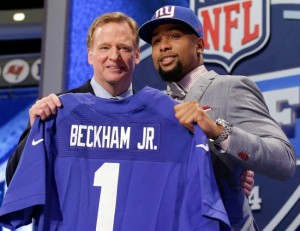 Our brothers at Sports Ruckus have been Grading the Draft over the past several weeks, and today the NFC East is up.  Giants fans feel they had a great draft, but let’s see how our partners felt about the G-Men’s draft.

This off-season there were whispers of Tom Coughlin getting fired.. If you are a Giants fan that usually is a sign of a rebound season or dare I say it Super Bowl. The 1st pick was a steal in Odell Beckham Jr who i thought was the 2nd best WR in the draft behind Watkins. A great route runner with the mitts to go with it . He also high points the ball and is very elusive in the open field. In the 2nd round they also helped Eli Manning out by trying to keep him off of his back. Center WESTON RICHBURG is one of the most ready O-Linmen in the draft. Weston brings athleticism and smarts to a really bad o line. He must get in the weight room though. 3rd round pick DT JAY BROMLEY has a great 1st step and has long arms. He plays the run really well and adds much needed depth to the D line.

4th Round choice RB ANDRE WILLIAMS was the nations leading rusher, he has an old school run between the tackles style that fits well with an old school coach like Coughlin. Williams will complement free agent acquisition Rashad Jennings really nicely. SS NATE BERHE doesn’t have all the measurables but the GMEN loved his production at San Diego st. OLB DEVON KENNARD is a hybrid player thats is great at rushing the edge. He is not the most athletic but Jerry Reese love his work ethic. CB BENNETT JACKSON has the size speed and ball skills to excel at the pro level. The former reciever is still learning the position but has good upside. With some good free agent signings and a really good draft the Giants could be having that feeling again.

Are you a New York Giants fan? Do you buy tickets?  You can save money by using Ticket Monster, see how much you can save here.