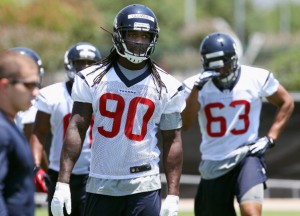 Sports Ruckus writer Jesse Peel has graded the entire AFC South, and some Texans fans might not like his grading, but he has some very valid points.  Let’s see what the Texans finished with.

Everything is bigger in Texas…and so was the expectations of their first round draft pick. This pick could either set the franchise back 10 years or keep them moving forward. We all knew Clowney poised to be the first pick but with all the clambering over their need a QB, the possibility of drafting Bortles or Manziel was a real option…at least in the “experts” eyes…AND since the expansion only two defensive players have been taken with the first pick-Mario Williams (jury is still out) and Courtney Brown (BUST with a capital BUST). Houston didn’t overthink this one.  They selected the freakishly talented Clowney-whom the Ol’ Head Ball Coach so lovingly alleged lacked the drive some of his other players possessed.  The 2012 film says he’s nuts but the 2013 film says “let’s not rush to judgment. Remember the Pete Carroll/Mark Sanchez controversy?” I think Spurrier will be wrong and this pick is the accurate decision. Add to that recipe offensive lineman Xavier Sua’ Filo, DT Louis Nix in the third round who can add beef to that line and Tom Savage who can be a really good back up to a veteran and you can say this draft was a success.  Houston-you don’t have a problem…except at QB.  Ok, that’s a problem.

Do you ever go to Texans games? Do you buy tickets at high prices?  If so STOP, go to Ticket Monster and save BIG.