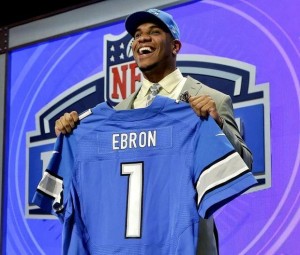 Sports Ruckus writer Justin Walters has graded the entire NFC North, and some Lions fans might not like his grading, but he has some very valid points.  Let’s see what the Lions finished with.

There are certain teams you can count on to shake up the draft by making a head scratching move.  Most of those teams got it right this year but not the old reliable Lions. The buzz was that they would take another 1st rd receiver instead of some much needed defensive help but they tricked us and took Surprise a receiving tight end who prefers not to block. Huh! Don’t get me wrong Ebron is a talented player who a lot of teams had their eye on but that back 7 was just so horrible last season.  They recovered a little with their 2nd round pick Van Noy from BYU, he kept the grade from getting really ugly.

Not really sure what their plan was, maybe it’s to just give QB Matt Stafford as many weapons as they can and just try to outscore everyone.  At least that is some kind of plan but like the great Mike Tyson said “Everyone has a plan until they get punched in the mouth” and I am sure they will. The Packers, Bears, and even the Vikings upgraded their Defenses but as the Lions always say “Contrary to what you believe Defenses don’t win championships Wide Receivers do.”Eric Ebron TEKyle Van Noy OLBTravis Swanson CNevin Lawson CBLarry Webster TECaraun Reid DTTJ Jones WRNate Freese  KEbron is an explosive receiving tight end. I like him just thought with all of the secondary players available at that spot they could have taken one.Love Van Noy, he does everything well and finds a way to make plays . He should come in and start from day one.Swanson is a solid hard nosed centerReid is an aggressive DT who could surprise if he can find a way to get on the field with the talent Detroit already has at the position

Make sure you follow Sports Ruckus on twitter and let them know if you agree or disagree with their grading.