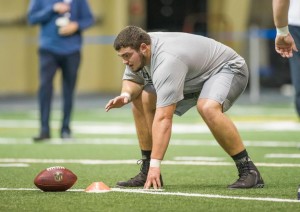 Our brothers at Sports Ruckus have been Grading the Draft over the past several weeks, and today the NFC East is up.  Cowboys fans feel they had a great draft, but let’s see how our partners felt about the Cowboys draft.

Everyone is giving Jerry Jones credit for not giving in to the Johnny Football Hype and setting his franchise back another 10 years. Which is like congratulating my 12 year old son for not putting his hand in the light socket.  As a longtime fan, Thanks Jerry. But let’s get down to the real deal, the Cowboys are coming off of a season where they set records as one one the worst defenses of all time and gave up way too many deep balls. Dallas’s biggest weakness was at free safety where they had the group of former RB CJ Wilcox who got benched early in the season, Jeff “the human highlight film” Heath who always finds himself on the wrong end of a highlight reel catch, and some guy named Matt Johnson who I am not sure even exists. At pick 16 “We” I mean the Cowboys had their pick of any safety in the draft , there was no doubt in my mind Clinton-Dix maybe Pryor, Bucannon, Ward ? Nope, Guard Zack Martin, he is a good player who will start right away, and I understand protecting Romo, but how about protecting him by not giving up so many points, forcing him to have to throw so often.

In the second round Jerry decided to play the name association game and take DeMarcus Lawrence to replace DeMarcus Ware, makes  sense except they traded away a 2 and a 3 to move up and grab a DE, when 2 higher rated DEs were available at the spot they would have picked in the first place and could have kept their 3rd round pick.  The best pick Americas team made was the choice of receiver Devin Street who should step in and be part of the 3 WR set early. The offense was upgraded but I am pretty sure the Defense is worse than last year. What’s actually worse than the 32nd ranked D? Not sure but we will see. For anyone that cares, the Cowboys did draft a Safety in the 7th round. So all is not lost, only thing is he is a strong safety who can’t cover. Oh well, it’s going to be a long season. Let’s just blame Romo “the man everyone loves to hate”, instead of the GM/Owner/ guy that always seems to find the camera while Dallas blows a game Jerry ! Jerry! Jerry!  I can talk all day about Jerry’s incompetence as an owner but ( oh man just got an idea for my next article). I will just sign off now.Zack Martin GDemarcus Lawrence DEAnthony Hitchens OLBDevin Street WRBen Gardner DEWill Smith OLBAhmad Dixon SKen Bishop DTTerrance Mitchell CBMartin is a potential pro bowl lineman who has experience at all 5 spotsLawrence has the tools to be a decent edge rusherStreet is a good route runner who catches the ball well and was a steal in the 5th roundDixon is a talented physical safety who needs to play more disciplined

Are you a Dallas Cowboys fan? Do you buy tickets?  You can save money by using Ticket Monster, see how much you can save here.