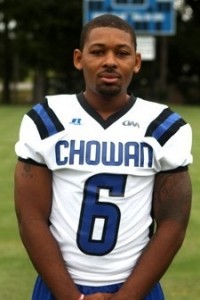 GET TO KNOW is a series that has been brought to you by Joseph Muia of NFL Draft Diamonds. Today Get to Know Jared Turner of Chowan University.

Favorite Slogan: Just wait on it!!

Proudest Football Moment/Memory: Tying the school record for most INTs in a single game.

You can check out Jared’s Highlight Film here

Football Philosophy: Losing is not an option!!

Game Superstitions: Pray & walk out last before the game

Goals/Aspirations for 2014-2015: Win DPOY in the conference and be named AP All-American

Career Goals: Make it to the NFL and have a successful career.

Who Will Win The Super Bowl: Falcons of course

Favorite Down Time: Being around family and friends

What Would You Want College Football Fans To Know About You: Not only am I a player, I’m a true fan and student of the game.

GET TO KNOW is a feature brought to you by NFL Draft Diamonds by Joseph Muia. Make sure you follow him on twitter @Joey435686