How can the USPTO ban the name Redskins and allow all these racist trademarks? 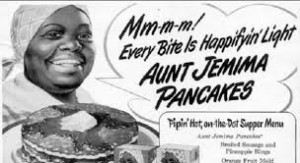 I am sick and tired of the United States Patten and Trademark office, especially since they made me shut down Heat-Peat, a trademark that I created to represent the Miami Heat winning the Championship more than once.  I think the United States government is trying to abuse their power once again. I wanted to list a few trademarks here that the USPTO had no problem signing the deal for, but were quick to shoot down the Redskins.

First up, Aunt Jemima.  I know we all grew up eating Jemima but how can you say that Aunt Jemima was not racial motivated? It displayed a black female portrayed as a “slave”.  It was a huge slap in the face of African Americans.  Here are a few more that are pretty darn racist if you ask me, what do you think?

Figgas over Niggas: This pending trademark seeks to cover a line of “Apparel for dancers, namely, tee shirts, sweatshirts, pants, leggings, shorts and jackets.” “Niggas,” of course, is a slang version of the word “nigger,” a term considered highly offensive towards black Americans.

Kraut Kap: Another recently-filed trademark, this one for a line of plastic lids. “Kraut” was made famous in World War II as a derogatory term for opposing German soldiers, as well as Germans in general.

Dago Swagg: A label created for a line of clothing. ”Dago” is a corruption of the common name Diego, and is used in English-speaking countries as an offensive term for those of Italian descent, and occasionally people from other Mediterranean countries as well.

Cracka Azz Skateboards: Unsurprisingly, this trademark was taken out for a line of skateboards and longboards, as well as associated clothing such as bandannas. While the USPTO helpfully notes that “The wording ‘cracka azz’ has no meaning in a foreign language,” “cracka” is a slang version of “cracker,” which in this context is a term of derision for whites, used primarily within the black community.

You Can’t Make A Housewife Out Of A Whore: This trademark for T-shirts and hats appears to imply that women involved in prostitution can never transition into the domestic role of a housewife.

Blanco Basura: Blanco Basura, translated into English, means “White Trash.” White trash is a insult that referring to poor, white Americans. The patent is used for beer and clothing.

Uppity Negro: This trademark for mugs and clothing uses an term offensive to blacks who argued for civil rights during Jim Crow laws.

Mammy Jamia’s: A company going by the name of A & S Cairns Limited has decided to attach its good name to an antebellum slur used to refer to an enslaved black woman who was in charge of household affairs, particularly caring for white children. The product? Frozen fruits and vegetables. Was it really worth it, A &S?

What about Uncle Ben?

In 1946, America first met Uncle Ben, then a rice-slinging domestic servant. The dapper black cook was only recently “promoted” after more than six decades of servitude.

Uncle Ben’s Inc., owned by Mars, named Ben its fictional chairman of the board in 2007. Visitors to the brand’s website can even take a tour of his virtual office.

While this move quelled some criticism, some still say the name “Uncle,” which was pejorative, needs to be changed.

I don’t know about you, but some of these are way more offensive than Redskins, and should also be banned.  I think it is only fair.