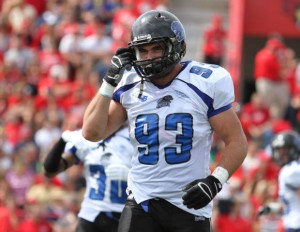 I was recruited mainly by the Big Ten and Mac schools and received offers from Eastern Michigan, Army, Air force, and committed to Illinois State.

I chose Illinois State because it was the best school both athletically and academically in my opinion and it was close to home.

To win conference and take a shot at the National Championship.

Not directly, I have been told I am a tweener, I played defensive end in college but have the potential to drop in coverage as well. I’ve been told I’m undersized for defensive line at 6’3 1/2″ 260 but I’ve never had trouble holding down my gap.

the first thing would be to find their best plays and look for anything that would give away their tendencies, such as a tight end tightening up his splits or a tackle lengthening his stance.

This season we played NIU which accounted for one of two losses. I played against Jordyn Lynch in that game.

I would compare myself to JJ Watt for our aggressive style of play and knack for knocking down balls.

My transfer from ISU to EIU, but when I got to Eastern I just never looked back and set goals and worked to achieve them.

Any team that blitzes aggressively and gets after the QB is appealing to my style of play.

I would say my motor in practice and in games.

I have little game experience dropping into coverage, which is something I need to improve on

I’m all about getting the job done. Put me on your field and that makes one less player you need to worry about.

My favorite team is the Bears because it’s where I’m from and my favorite player was Urlacher and then Peppers but there both gone now.

The loss of my brother and father both affected me a lot but family, friends, and football have always helped me put my mind in a good place.

I would have dinner with Jesus, Abe Lincoln, and Ditka off the top of my head.

I would buy a hyperbolic chamber and cut down that recovery time.