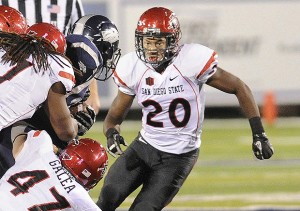 Draft Diamonds Prospect Interview: Nat Berhe, SS, San Diego State
How many teams were recruiting you out of high school?
When I finally narrowed it down it was between UTEP, Minnesota, Colorado and SDSU.
Where did you choose and why?
I chose SDSU because of the coaching staff and the location. I’m from Southern California so I know there’s no better place to be than sunny San Diego.
What were your goals for your senior year?
I wanted to win the Thorpe award, I felt like I was in a good position to win it at the start of the season, however, I wasn’t able to come around with enough interceptions to do that. I always wanted to be my teams MVP and gratefully I was named the MVP by my teammates so they was an amazing award. I also wanted to make the all conference team and I was thankfully able to be the only Aztec selected to the MWC All conference team.
Have any scouts met with you, and if so what are they saying?

I meet with the Redskins, Jets and the Steelers at the Combine. Was able to visit the Colts a few weeks ago and also worked out for the Chargers. Since the combine I’ve spoke to nearly every team. All the people I speak with are basically saying the same thing, they love my play, they want me to be a member of their team and a few teams have told me that if I’m still on the board in the 3rd or 4th that they’ll try their best to get me.

I’m not afraid to tackle, I respect my peers more than anything else but I’m one of the few guys who will come downhill and hit you in the mouth. If you watch the Hawaii game I was going head to head with Joey Iosefa whose about 240 lbs. If you put that tape on you will instantly see what separates me from the rest. Also I can recognize a play pretty quickly, that’s just a result of me watching a ton of film. Lastly, I’ve always been the type of guy to put the goals of my team above myself, at the end of the Hawaii game with no interceptions on the season I grabbed and threw down what could have been an interception in order to secure the W.

First I look at the formations and figure out the plays that could be run out of that. Then I look at my competition and see if there’s anything different that they do so I’m aware of it. One thing I did before every game was I would go in my hotel room before the game and put on all the plays of the opponent and walk through the play like I was in the game. This helped me a lot.

Joey Iosefa. I don’t know many DBs in the country who would try and hit him in the chest. The guy is huge and he runs hard.

I’d have to say the Honey Badger. I’ve been told we both have the ability to disrupt an offense. I’m always around the ball and get there with a bad attitude.

What was the biggest obstacle in your life you had to overcome, and how did you overcome it?
The 40 yard dash at the combine, after that I had to dig deep and fix it which I was able to do at my pro day.
What system fits your style of play the best?
I can play in any system that wants me.
What is your biggest strength?

What is your biggest weakness?
Sometimes I look for the big hit and miss it.
If I were a GM and gave you a second to sell yourself, what would you say?

I’ll give every ounce of my being to bring a championship to this organization.

Growing up, who was your role model?
My Mother, she’s extremely smart, she runs her own non-profit and employees around 40 people. Watching her really taught me that hardwork can get you anything you want.
Who was your favorite team and player in the NFL and why?

I really don’t have a favorite team, I enjoy watching any body. My favorite player is Eric Berry, the guy is a hell of a football player.

What was the most tragic event that ever happened in your life and how did you overcome it?
When my brother sent me a text that said “4.71” I couldn’t believe it, it was the biggest fluke in my life. You train so hard for something and then you change something like your start because you know that run means so much and you want the best advantage and when it goes wrong it’s devastating, it’s hard to continue competing but I look at it now as what my Mother calls a “character building moment.”
If you were to have dinner with three people dead or alive who would it be?
(1) My grandmother, she passed away in 2006 and I just wish I could let her see what I’ve become.
(2) Barack Obama, really would just want my grandma to meet him.
(3) Kobe Bryant, his killer instinct is legendary.
With your first paycheck what would you buy?
I’m not really big on material things and my family doesn’t have any immediate needs so I think I’ll put my first paycheck in the bank.
Related TopicsNat Berhenat berhe aztecsnat berhe sdsunfl draft nat berheNFL NFl