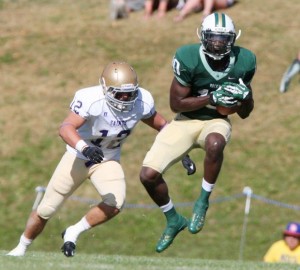 Initially out of high school my grades and test scores did not qualify me for a Division I scholarship, so I took an alternative route and attended Ellsworth Community College in Iowa. From Ellsworth, I had a short stint at the University of Wyoming, where I eventually landed at Rocky Mountain College in Billings Montana.

I had a lot of goals my senior year, both athletic and academic. The one’s I tried to focus my attention on most were, graduating with my degree in Sociology and leading our conference in touchdowns and receiving yards.

I had a total of 9 scouts talk to me, and all of them were saying that they liked my speed and production. They also said I had great NFL size. They also told me to stay healthy and if I could do so I would have a good shot of playing at the next level, even though I was playing at a small school.

I believe that my size and ability separates me physically. My size and ability also allows for me to go up for the ball and win a lot of jump ball situations. At 6’3 217lbs and running a sub 4.4 that helps as well.

When watching film I look at their coverage’s, also how aggressive their defenders are, do they attack the ball, do they jump routes and if they are vulnerable to double moves.

The toughest player that I ever faced was a defensive back by the name of Demar Dorsey. He went on to play his college football at the University of Michigan.

A.J. Green, I feel our frames are similar, we’re both tall and lean. Also, I feel our style of play is very similar. We both enjoy competing for the jump ball.

The biggest obstacle that I had to overcome was growing up in Fort Lauderdale, Florida. An environment filled with criminal activity. Family and friends were in and out of jail, it’s a really poor community, and every day you are faced with situations that could alter your life. Another obstacle was the absence of my parents. Not only being raised in a tough environment I was forced to pretty much raise myself. My Aunt did the best that she could to help me find a better life and situation. The way that I overcame these obstacles was I knew if I really wanted to do something special I had to stay focused. Football allowed for me to have something positive it also gave me a community that supported me. With that support and my own personal drive and passion to play in the NFL, this is what has allowed me to stay focused along my journey. That alone has got me to the point I am at now, a college graduate, and a NFL hopeful.

I feel with my size and speed I can fit a number of systems. I have played in a number of Pro Style offenses so I am very comfortable in just about any system.

Sometimes I feel I am too passionate about the game. Only because it has given me so much when I had nothing.

If you’re looking for someone disciplined both on and off the field, coachable and very accepting of constructive criticism then look no further, because I am your guy.

My cousin Asante Samuel, he’s the reason I started playing football. He comes from the exact same situation I came from growing up. He’s always been a great role model to me.

Tampa Bay Buccaneers, and Keyshawn Johnson in my opinion he’s one of the most dominant wide receivers to ever play the game.

Growing up my father was very abusive both physically and mentally. His abusive eventually landed him in a prison cell. Upon his release the abuse continued within our household, not being able to withstand it any longer I choose to move in with my sister. I was 15 years old when I left my home. My sister along with my Aunt did what they could to help me. I’ve continued time, and time again, to persevere and overcome these circumstances I’ve had to deal with. I can say although I don’t have a “happy ending” so to say, I’ve busted my butt to go on to receive my high school diploma and I recently became a college graduate just this past Saturday. So I feel it is safe to say I have overcome these circumstances by not being mad at the world and the things I’ve had to deal with, but instead use that fire to push and push and become the best me I could possibly be.

John Madden, my Aunt and Tupac

I will buy a house, reason being, it is something that I can call my own.