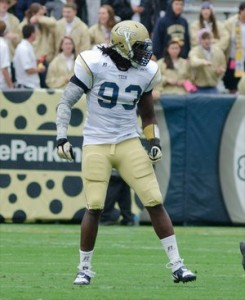 I chose Georgia tech because I felt it was the best fit for me football and academic wise. I really liked the coaching staff and it just felt right.

My goal my senior was to be all conference but a series of injuries prevented that but it was not Gods plan for me. My team goals was to win the ACC championship after we came up short the year before.

I’ve met with more than 5 scouts and they all say that I will get a chance in the NFL that I just have to be ready when that call come.

My size, physicality and work ethic. I believe I have an unmatched work ethic because I’m always going to be hungry to be the best.

I look at the offensive lineman I’m going against that week. Any tendencies that he might have. Is he light feted or like if he puts all his weight forward in his stance. I also look at what moves other players had success with against him. Things like that.

I played a lot of great players at Georgia tech. I would have to say Johnathan Cooper the guard from the University of North Carolina. He had great feet and leverage. Also Cordy Glenn was pretty good as well.

Justin Tuck because he physical and strong. I pride myself in the weight room so that would be a good comparison.

Biggest Obstacle I’ve ever faced was my junior year after the UGA game when I lost my starting job going into the Acc championship game against Florida State. I pulled my back before the UGA game but didn’t tell nobody and had the worse game ever. I called my mom tearing up and she told me that God has a plan and to not lose faith and ask God what I want him to do for me and believe. I carried a chip on my shoulder that whole week of practice and heading into the ACC championship game, I ask God to let his light shine bright on me and use me to show the world how great he is. I didn’t start that game but I ended up having one of the best game of my career recording 2 tackles, a sack, a forced fumble and a fumble recovery.

A 4-3 scheme fits me best because I’ve had my hand in the ground most of my collegiate career but I can also play the 3-4 stand up outside backer. I can learn and adjust with whatever the coach wants me to do

My physicality and relentless. Also my ability to learn the plays fast and do my Job.

One weakness of mine to use my hands a little bit better and mix up my pass rush moves but I am turning those into strengths.

I’m one the hardest working players that you will ever find and I’m pissed off for greatness. I was ready to get to work yesterday and I know that I will contribute to your defense and organization.

My role model growing up was Kobe Bryant and Ray Lewis. They never listen to the critics and the naysayers. When those lights came on and their backs where against the wall, they became warriors and where at their best.

I was a big falcons fan growing up when Vick was at Quarterback. I’m still a Falcons fan because they are my hometown team

The most tragic event that ever happen to me was when my uncle passed away a couple of months ago from a stroke. He was my closest uncle and he passed away in Nigeria before I could see him again. My last time seeing him was 2005 and it still hurts now but I pray to God every day that he gives our family strength and everything is going to okay.

My Mom, Dad and Jeremy Elder. My Mom and Dad because they were there since Day 1 and supported me even when I was that skinny, uncoordinated 9th grader. Jeremy Elder because he was like a mentor to me and his life was cut short before he got his chance. He always said “All I need is one chance to prove that I can play” and I believe that he is going to get that chance through me. I just want to make him proud of me.

10% of my first paycheck is going to God because he’s been so good to me.