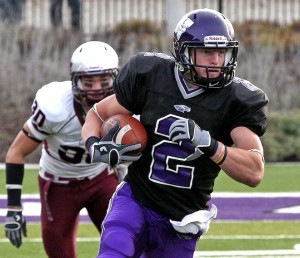 -I had a majority of D2, and D3 schools recruiting me along with a few D1 and FCS schools out of high school.  Southern Illinois, Minnesota, Minnesota Duluth are a few.

-I ended up attending and playing for the University of Wisconsin Whitewater. They have a great tradition there, they are close to home so my parents could come watch, and I wanted to win a National Championship. Was fortunate enough to end up winning 3 championships while I was there.

-My ultimate goal was to win a national championship and finish my college career off on a high note.

-I’ve talked to and met with a decent amount of scouts. Just telling me to keep working hard and they will keep in contact with me.

-My work ethic and athleticism. I may not have the largest hands but they are strong and I rarely drop a ball. Always try to catch everything. I don’t think their are many receivers if any that have both my strength and speed. I’ve been clocked in the 4.4’s in the 40 and also can bench 225 lbs. almost 30 times

-When looking at film I look at what the tendencies are of the overall defense. And the tendencies of the secondary. What is their base converge? How do their safeties play and what doesn’t that mean. Do the corners play flat footed or bite hard on head fakes and double moves. Also look at how they play run. Come up hard or they soft and if you can cut them or not. All defenses are different but all have tendencies and a weakness.

-Noah Timm #31. Former teammate and all American that I faced everyday in practice. Hard worker, smart and very fundamentally sound player. Wish I could have lined up against him a few more times.

-Jordy Nelson. Love the way he plays the game.

-The biggest obstacle I’ve had to face is injuries. Breaking my ankle my senior year and having to watch the team from the sidelines. Fortunately for me I was granted a medical redshirt.

-Any system. I can play the slot as well as outside.

-Like I mentioned before my biggest strength would be my combination of speed, strength, size, and athleticism. 42″ vertical and 10’9″ broad jump. I go up and get the ball at it’s highest point and I can get off of press coverage. I like when corners press and can get physical with them.

-That from day one I’ll be the hardest working kid on your team. A gym rat and a student of the game that will do anything it’ll take to be successful and help the team from playing wide receiver to being on special teams.

-Favorite team is the Green Bay Packers. I played running back when I was a kid and through high school so my favorite player is Barry Sanders.

-The recent passing of my grandpa. Just knowing he’s in a better place and he’s up there looking over me.

-Pay off my student loans