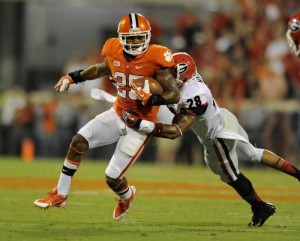 Out of high I was highly recruited and ranked In the nation, so I would say about 15 or more…

At the end of the recruiting trail I decided to picked Clemson. The reason is at the time I wanted to play and learned the game of football from the best running back stable in the country and Clemson had it. I learned a lot from CJ Spiller, Andre Ellington, and Jamie Harper who all got drafted. Surrounded by a backfield like Clemson’s, I knew when I got my chance I would be ready. I also saw the bigger picture which was getting my degree.

My goals for my senior year were to be a 1,000 yard rusher, contribute in the passing game, win the BCS, develop into an all around player on and off the field of football, all while having healthy fun.

Yes I have met with some scouts and the feedback I’m getting is that they like how I can be versatile. Yes I’m a running back but being able to catch the  ball out the backfield is a plus. My cuts and vision are great.

At my position, the main thing that separates me from others is the fact I’m a game changer… You can line me out wide, place me in the slot, have me run routes out of the backfield, play special teams, and of course impact the running game..

When breaking down film, I look at what’s the defense’s favorite coverages…Do they play odd, even, over or under front…Who they bring in when they want to blitz or cause confusion..If their front seven are physical and do they have a weakness.

If had to pick a the toughest player I have faced, I would  say everyone I have faced. The reason is because if they weren’t tough or good enough to play this sport, they wouldn’t be playing it. Just that my team and I have had better players and wanted it more.

If I had a compare my play to a person In the NFL, I would choose Andre Ellington, Reggie Bush, and LeSean McCoy. They all are running backs but you can use them in a variety of ways. When it comes to running the ball and the passing game..Also, they can all return kicks too.

The biggest obstacle in life that I had to overcome was learning how to walk. I was born with a club foot and at a young age I quickly realized that I wasn’t like the normal kids. But over time with a lot of physical therapy, hard worker and dedication, I got stronger and picked up a football, which made me feel like I was normal and couldn’t be touched.

To be honest it doesn’t matter what system Im in. I will have to adapt and learn the system..Whatever team or teams I play for throughout my career they will put me in the best place where they think I can help the team but the fact is I have the ability to play in any system and do not feel limited to one.

My biggest strengths are my toughness, my vision, the way I make my cuts, and my catching ability. I’m a hybrid between a running back and receiver. Plus I can play some special teams..

My biggest weakness I will have to say is the technique in my pass protection. It does not always look good but I will do whatever it takes to stop the defender from hitting the QB and get my job done, but I have been working on my technique to do it in a more efficient manner.

> If I were a GM and gave you a second to sell yourself, what would you say?

Sir, if you know me and have been following my journey up to this point, my background speaks for itself. I am a guy who has been backed in a corner where people and things have tried to stop me from reaching this point but look where I’m at today. Standing here in front of you which is showing you that I have beat the odds and I’m a fighter. I don’t give up when times are hard. It doesn’t matter where or what is needed to be done I’ll get the work done..If it’s playing special teams, offense, or even if you need me to play some defense. Whatever it takes to get the job done I will be there. If you don’t believe me, tell me what player has sat behind some of the best backs in college football and had a chance to transfer but has been patient and became a 1,000 yard rusher when you have a high power offense that focuses on passing especially when its lead by guys like Tajh Boyd, Sammy Watkins just to name a few….because you can look at my record and know that is ME. If you are looking for a hard worker, game changer,and someone who just loves the game it’s ME, Roderick Jamal HOTROD McDowell

Growing up, my role model was my uncle Freddie Solomon and my mom.. Freddie was my first football role model and my mom was the person who taught me never give up and work hard for everything as well as to stay humble and put God first.

Honestly I don’t really have a favorite team, I love the game of football. But my favorite players are LeSean McCoy and Andre Ellington. The reason is because I see myself doing playing in similar fashion as they do and having the same success they have had in the NFL.

The most tragic event that ever happened to me in my life was when I lost my Grandfather and his last words to me were, “If I don’t see you run the football no more or at the next level just know I love you for YOU not cause of football.” So every game I play like he’s in stands watching me.

With my first paycheck I’ll make sure my family is comfortable. I’ll put some in the bank, in a savings account because after watching 30/30 broke, I’m scared to be poor or broke. Also, give a little portion back to the church.