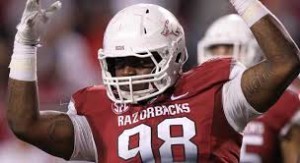 1) How many teams were recruiting you out of high school?

-Answer: I do not have an exact number, but I was highly recruited coming out of high school.

2) Where did you choose and why?

-Answer: I chose the University of Arkansas! Growing up in Oklahoma it’s either Oklahoma State University or the University of Oklahoma, but I wanted to be different. After researching I realized the SEC was for me! After taking a visit to Arkansas I was sold because of the family atmosphere.

3) What were your goals for your senior year?

-Answer: My goals for my senior year were to be an impact player, make a lasting impression on the Arkansas community, and play every snap like it’s my last.

4) Have any scouts met with you, and if so what are they saying?

-Answer: Yes, I’ve talked to a lot of scouts. Everyone is pretty much asking me the same thing, “How will I bounce back?”

5) At your position, what separates you from the others?

-Answer: I feel like my combination of strength and speed gives me a good advantage over the competition.

6) Tell us what you look for when breaking down film?

-Answer: When I’m watching film I’m looking for any edge over my opponents. Any stance change, weight shifting, body twitches, what moves first on his get off, what moves beat him, pass protection, anything that I can exploit against him on the field.

7) Who was the toughest player you have ever faced?

-Answer: I feel like being able to work with Travis Swanson everyday made it a lot less tough on Saturdays. Getting to go against one of the top offensive linemen in the country was very beneficial. Also, studying his play and which moves work best helped with my game preparation.

8) If you could compare your play to one person in the NFL who would it be?

-Answer: I feel like my game mostly compares to Nick Farley — playing with a high motor and being disruptive, but being able to adapt and play within any scheme.

9) What was the biggest obstacle in your life you had to overcome, and how did you overcome it?

-Answer: My toughest obstacle that I have had to overcome came this season when I broke my leg. I overcame it through hard work and willpower! I knew that I had a goal and wasn’t going to let anything get between me seeing it through.

-Answer: I feel like my biggest strength is my drive, the mindset to “work” and “never be out worked.” One thing that I could improve on is being able to analyze film better.

12) If I were a GM and gave you a second to sell yourself, what would you say?

-Answer: I would tell you that I’m a hard worker and that you will be getting someone who knows how to get it done. I carry myself with the mindset of “earn your keep.”

13) Growing up, who was your role model?

-Answer: Growing up my grandpa was my role model! I would watch him go to work early every morning and come home late. He earned everything he got and worked hard for it! From an early age I knew that I wanted to be that same type of man.

14) Who was your favorite team and player in the NFL and why?

-Answer: My favorite team was the Ravens. I really liked the way they played defense and the way they carried themselves on the field. My favorite player has always been Warren Sapp. Since I play defensive tackle, I have watched his game in order to help form mine.

15) If you were to have dinner with three people dead or alive who would it be?

-Answer: If I could have dinner with three people, dead or alive they would be Will Ferrell, Kevin Hart, and Redd Foxx.

16) With your first paycheck what would you buy?

-Answer: I will buy a house.