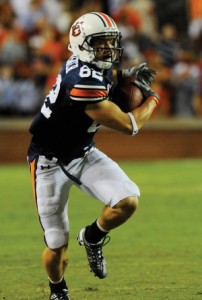 Saddleback Jr College. I was a late bloomer physically and was told if I took the JC route I had the talent for Div 1. Ended up getting offers from 3 SEC schools. Auburn university.

Do whatever I could to help the team and coach Malzahn get to a BCS bowl game.

Start every game, stay healthy, and finish the season as strong as I started.

Yes, I have the speed and explosiveness to play both the slot and outside WR positions at the next level.

Experience of playing in the SEC and Speed.

Alignment, assignment, and my own individual effort.

Being from the state Montana and being physically a “late bloomer.” Sought out great coaches/ teachers and worked harder than everyone else/ every day.

Playing in the slot, option routes.

Being able to play both in the slot and outside. WR savvy.

The WR position is what I was made to do, no one will compete, work harder or more at their craft than myself.

49ers, Jerry Rice and Michael Irvin. Because I heard stories of Rice’s work ethic of him catching bricks and runnings hills. And Irvin’s competitiveness on and off the field. And how they each transferred that to playing on Sundays.

My dad committed suicide when I was 14. Found a little faith and a big work ethic and haven’t turned back since.