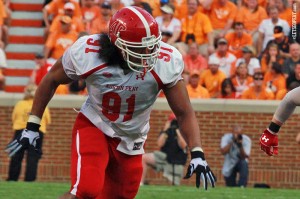 Draft Diamonds Prospect Interview: Iosua Siliva, DE/DT, Austin Peay
How many teams were recruiting you out of high school?
One. When I was coming out of high school the island wasn’t recruited like it is now. American Samoa is 10 hours away from the west coast so most people don’t even know where we are. I chose Austin Peay State University and it was a decision that was made after talking to my parents. We were looking for me a chance to go to college for free and they offered me.
What were your goals for your senior year?
My goal was to lead the team in tackles for loss and to become an All-American. I was selected to be all conference and be on the Senior Bowl watch list before the season. I broke my leg and had to miss most of the FCS games and came back and played the last two games but wasn’t 100%. I didn’t want to miss my senior day game.
Have any scouts met with you, and if so what are they saying?
Before the season, I met with most, if not all, of the teams but then I broke my leg. Lately I’ve heard from the Colts, Titans, 49ers, and Giants the most.They are high on the fact I can play inside and outside. They like my motor and they keep saying my ceiling is very high.
At your position, what separates you from the others?
– I am more physical at the point of attack and I can play both inside and outside on the DL. I believe my hustle regardless of where the ball is going also is another thing that separates me.
Tell us what you look for when breaking down film?
-I will first look at the formation and the plays out of each different formation. Then I will look at the down and distance. Then I will study what each individuals on the line and what they do pre snap to each plays.
Who was the toughest player you have ever faced?
We played a lot of FBS teams while I was at Austin Peay. The OL at Wisconsin a couple years ago was tough. They sent all of them to the pros.
If you could compare your play to one person in the NFL who would it be?
I think I am in line with a lot of the guys who have come from American Samoa. I love watching Paul Soliai, Domata Peko, and Matt Toeaina. All are strong and play with their hands.
What was the biggest obstacle in your life you had to overcome, and how did you overcome it?
Coming to the states and going to college where everything in the classroom is done in English has been something I have had to overcome. I am very proud that I am an Academic All-American and have a 3.89 GPA in Agriculture Sustainability.
What system fits your style of play the best?
I am comfortable in both a 3-4 and 4-3. My size and athletic ability allows me to go back and forth.
What is your biggest strength?
Playing the run. I use my hands well and am big enough to take on double teams.
What is your biggest weakness?
I am still learning the game. A lot of the guys I am going against have been playing for a long time. With me being from American Samoa, we didn’t have the stuff the players have here growing up.
If I were a GM and gave you a second to sell yourself, what would you say?
Give me a chance. I love the game and have a passion to be successful. I am not a one dimensional player. I am one of those players that can be on your roster and give you many different looks and play many different roles.
Growing up, who was your role model?
My older brother.
Who was your favorite team and player in the NFL and why?
-Favorite team was Dallas cowboys and favorite player was Demarcus Ware, but now he is not there anymore. I chose the Cowboys because Ware was there and I chose Ware, because he is a humble person and he will not stop until the game is over.
What was the most tragic event that ever happened in your life and how did you overcome it?
-Finding out that my mom had cancer. We did a lot of praying!.
With your first paycheck what would you buy?
Save it! You never know how long you get in this league. Plus, I have never learned to drive so I don’t need a car.
Related Topicsaustin peay iosua silivaIosua Silivanfl draft news iosua silivanfl draft nflnfl draft prospect iosua silivanfl news iosua silivaovc iosua siliva