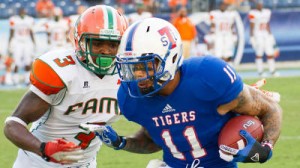 I had interest from a good amount of FBS schools, along with FCS schools. I took plenty of visits and was in communication with a number of coaches

I chose Tennessee State University because, unlike the other schools, the coaching staff at the time believed in me and that I was going to become eligible upon graduation. My GPA and ACT score were such that my eligibility wasn’t appearing too certain. But my recruiter and the Head Coach at TSU told me they trusted me to do my part; so much so that I and my family were stressing it more than they were. I am very big on loyalty. They stood by me and had faith when everyone else jumped ship.

My ultimate goal for my senior year was for our team to win the FCS National Championship. Additional goals for the season included an OVC Championship, as well as leading the team and the conference in all receiving categories. With that being said, the individual goals did not come but we did make it to the second round of the playoffs. Through that experience I learned that sometimes you have to die to self for the team’s best interest!

I have not met with any scouts, except for those at my pro-day. The one’s I did talk to told me they like my size and that they would like me more in the slot.

Knowledge of the game, versatility, and leadership. I am a true student of the game I do believe, I really do love this game and try to give it everything I have from the way I approach it and the work I put in. My versatility comes from me being so knowledgeable of the game, I have no problem doing the little things that often have a bigger effect on the game than people realize. A coach can ask me to do something or tell me they want me to play a new spot and if I don’t know how to do it or if I’m not the best at it, I will work at it until I am the best at that position. My leadership is second to none. I am not a big talker when it comes to work, because I feel like actions speak louder than words. To me, it’s evident that my style of leadership is effective when my teammates want to work beside/with me because they’re confident I’m the one that’s going to push them to get to that next level. Or when the DBs on my team want to go against me because, according to them, it makes going against WRs in games easier; no other WR works or goes as hard as I do!

When I break down film I look for tendencies! With defenses it is all about tendencies because DCs (Defensive Coordinators) have certain packages, blitzes, coverage, they like to go to in certain downs and distances. When breaking down film on DBs I like looking for a lot of different things but the first is his “Dog Meter”. How physical is he? How he responds once you beat him deep, once you beat him off a press, once you put you hands on him during a run play. Those things will show me everything about a DBs heart and where he stands on the “Dog Meter”. Another thing I look for is his technique, his press technique, his bail technique, and his block sheading technique. The last thing I look for is his tackling anglings because we all know that football is a game of angles. This will show you how he likes to attack you once you have the ball, does he put his head down or does he see what he hits.

The toughest player I have faced out of all my years of playing football would have to be myself! Coaches tell you all the time that the only person that can stop you from being great or taking your game to the next level is yourself!

I would have to say my game compares to Hines Ward! It’s similar to his in versatility and in willingness to block. He has no problem blocking or trying to lay a DB out. I think my game measures up to that; just because I play WR does not mean I can’t be the one to deliver the blow to a DB.

I think the biggest obstacle in my life is having a childhood with my father in and out of the picture. Growing up I wanted to be like my father so much. So much so that when I started playing football I played QB because that was his position and even had to wear a certain number because he wore it. Having him in and out of the picture was a huge obstacle to overcome, not only because of my desire to be like him, but because, as a child, I wondered if I was the one doing something to drive him away.

My physically. I have been told that I play WR with a linebacker mentality. Throughout high school, I played safety along with WR. I was also brought up to be a hard nose football player and to be the deliver and not the receiver of a lick!

I feel like my passion sometimes can be my biggest weakness. I say that meaning that sometimes I don’t know when to stop, or to take a break. I don’t like to lose so my passion for the game sometimes has an effect on my emotions.

I have a undeniable will and when I want something I will not stop until I receive it or achieve that goal!

My role model growing up would definitely be my mother! All the things that she did for my brother and me, all the sacrifices she made to give us better than what she had, it’s just mind blowing how she did it. She was never one to complain about things; at the end of the day she did what she had to do. She is almost the one that taught me how to play football. When I was 5 years old and we lived in the projects, she put a football in my hands and told me that this is what is going to keep you out of trouble. The values she has bestowed in me throughout my life, I am so grateful for and never will be able to thank her enough for that! That is why I try to put a smile on her face in everything I do.

Growing up my favorite team in the NFL was the Dallas Cowboys. My entire family on my mom’s side was Cowboy fan’s, they would always get me Cowboy gear and on the holidays we would always watch either current or old Cowboy games. My favorite player was Peyton Manning. I got the chance to attend his last college game at the University of Tennessee and I was a fan ever since. His work habits are unbelievable and it shows in his success.

The most tragic event in my life would have to be when I was paralyzed after taking a hit one day in practice during my sophomore year of college. I had to miss the remainder of the season and was told that I would never play football ever again. I came back the next season bigger, strong, faster and led my team in receiving. I also have had the opportunity to share my story with a number of youth and how that event has had a major impact on my life and made me grow closer to God!

If I had the opportunity to have a dinner with three people of my choice they would be, Martin Luther King Jr., Anne Frank, and Sun Tzu. I would have to say Martin Luther King Jr. because I would just like to know how during all the negatives he went through how did he find the positives used to keep giving hope to the people. Anne Frank because I’d be interested to know how she persevered and kept hope knowing that if she or her family were found they would be eventually killed. Lastly, Sun Tzu for the simple fact that he is the author of my favorite book, “The Art of War,” and is one of the greatest military generals, strategist, and philosophers.

I would help out the people that helped and truly believed in me, and unfortunately that is very few! Again I am big on loyalty and helping others before I helping myself.