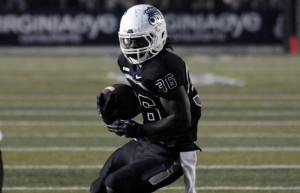 Not too many teams it came down to Hampton University, Delaware, and I had a partial scholarship to North Carolina.

I chose Old Dominion University, because it was a new football program and I wanted to leave my mark on the university before I left.

My goals were to be able to compete with the teams on our schedule, which were teams like ECU, UNC, PITT, and Maryland.  Also be used more in the passing game, not just the running game and staying completely healthy.

No I haven’t met with any individually but I competed in the College All-Star Bowl and the NFL Super Regional Combine.

My blocking ability separates me from the other running backs out there.  I came from a pass-based offense so if I wasn’t in the receiving part I was left back to block. Also I have very great hands that translate to the NFL offenses these days.

When breaking down film, I like to look at the secondary alignment that usually gives away the blitz tendencies.  It helps me play a lot faster and know what to expect in the run game and in the pass game when I’m left back to block.

I can say J.J. Wilcox former player at Georgia Southern who is now a safety for the Dallas Cowboys.

I would have to say Clinton Portis because he was an all around running back, plus played very smooth and calm.

Coming off the season I had one more semester to go to graduate and I wanted to finish up.  So trying to juggle my academics, workouts, and trying to pursue my dream to the NFL was pretty tough.  I got very frustrated and stressed at times because I would miss class because I would have to go out of town for football business trips. Thank God I had some teachers that were willing to work with me.  For the most part I had to minimize my social life and just focus on the task at hand.

I adapted to the spread offense from playing at Old Dominion University but I could see myself in a pro style offense.

My vision when I have the ball, I can see holes and openings like no other.

I am tough on myself so sometimes I feel like I haven’t done my best at times.

I would say that I am a hard worker and willing to do whatever to make your team.  I would present myself with great character, represent first off the organization, my family, and myself in the greatest way.

I would have to say my brother.

Growing up I never had a favorite NFL team but I use to always admire Marshall Faulk, he was such a hard and tough runner for his size and plus he didn’t talk much he just got the job done.

My freshmen year in college my mom was diagnosed legally blind and that was really tough for me and my family. She has had two cornea transplants so she’s doing better but still can barely see.

My brother, Mom and Dad.

My first pay check I would buy a nice little one bedroom condo and a car to get me around since I never was fortune enough to get have a car growing up and just then give money to my parents to help them out.