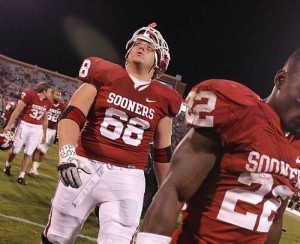 Many schools including Oklahoma, Alabama, Oregon, Missouri, Auburn, Ole Miss, Baylor, Texas Tech, Arkansas, and several others‎-Where did you choose and why?  I chose The University of Oklahoma.  I grew up a fan of OU, going to games with my dad from a very young age so it was a dream come true when Coach Stoops offered me a scholarship.  It came down to a decision between Alabama and Oklahoma.  I feel like I made the right choice, especially after the Sugar Bowl this past season.

Complete my degree, work hard to improve myself physically and on the field, be a leader for my team, and help my team get to the National Championship game.  We didn’t make it to The big game, but we were blessed with the opportunity to play in a BCS game, the Sugar Bowl.  I think it’s safe to say that we made the most of the opportunity.

Yes, I have spoken to several scouts and they are saying that they like my athleticism, physicality, attitude and intelligence.  Most have said I’m on their “short list”.

I think my physical ability, durabilty and intelligence first.  Next, my versatility, I’ve played nearly every position on the offensive line.

I usually try to identify defensive tendencies in relationships to the offense’s formations and personnel. Also, I study personnel and each player’s individual tendencies.

Probably Louis Nix III from Notre Dame. He is a physical player who’s size makes him that much more difficult to block.

I have had numerous experiences that I’ve seen others struggle with but with which we had good support and were prepared well to handle. Mostly, I’ve had a great life with a lot of opportunities. The greatest challenges/obstacles for me has been helping friends grow, make good/healthy choices, or deal with the results of poor choices.

I think that I am versatile enough to be an effective player in any system.

I think it’s consistency.  I’ve always had a goal to be available to help my teammates and play at a high level every day whether it’s practice or a game day.  That’s meant playing banged up at times, but I think I have grown stronger and my teams have benefited from that.

From a football perspective, over my college career I’ve spent a lot of time working to improve my hand placement and second level blocks and I think these have now become strengths.  I’m sure there are things I can do better and my next coach will point those out to me and I’ll work hard to improve those areas too.

I’d say give me a shot and I’ll make you proud.  I’ll prove to you that I’ll be there every day and play my hardest for you, and you won’t ever have to worry about character issues with me.  I’ll help your team be a better team.

My father who was my little league football coach and my biggest supporter.

The Chicago Bears and my favorite player of all time is Larry Allen.

The most tragic event I’ve been involved in happened to other people in my area.  It was when a huge tornado struck an area not far from where I live.  I went down to the area right after the storm (and several times after that) to provide any help that I could to anyone that might have been injured or trapped in or under houses.  On later trips, I helped people with cleaning up the debris from their homes and belongings, which at times was heartbreaking.  While this situation was a terrible tragedy, it was also amazing to see the strength and power of both those people who were affected by the tornado and those who rushed in to help them.  Despite the devastation, I was encouraged by this and I believe this experience made me a stronger, more sensitive person.

I don’t necessarily have anything that I would buy but I do have some things I would like to invest in.
‎