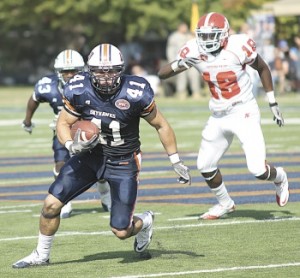 Only a couple teams recruited me out of high school. Mostly NAIA schools.

Goals for my senior year were to win a conference championship. Be an all American and lead the OVC in tackles. I accomplished the latter two.

I have met with scouts and they’re telling me they think I move very well and have a good skill set.

What separates me at my position is being able to run sideline to sideline. I make tackles. Also, being able to understand what’s unfolding in front of me.

I look for tendencies of certain players to dictate certain plates. For example if the guard looks which way he’s going to block. I also look at probabilities of what plays on what down and distance the other team likes to run.

The toughest player I ever faced was Jordan Lynch. Extremely versatile player.

I would compare myself to Luke Keuchly. He is all over the field and makes a lot of tackles.

What was the biggest obstacle in your life you had to overcome, and how did you

The biggest obstacle I’ve faced was deciding whether to play basketball or football in college.

I think either a 4-3 or a 3-4 fits me well. I’m versatile enough to play in either system

My biggest strength is my pursuit to the ball. I have a motor.

My biggest weakness would be that there are times I want to do too much.

I would say there is NO ONE that will work harder than me. I will earn my keep.

My role model growing up was my father. And still is. He taught me how to be a man.

Who was your player in the NFL and why?

My favorite player was Brian Urlacher because of his leadership abilities and his work ethic.

I would eat with my grandfather, father, and my brother.

The first paycheck I got would go into my savings account.