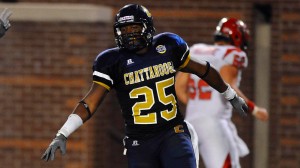 I chose the University of Tennessee at Chattanooga because it was close to home. They had hired a whole new coaching staff with the head coach coming from Richmond University who had just won a National Championship at Richmond. Also my older brother attended UTC and played football at that time so it was cool following in my brother footsteps.

Just a few; They told me to keep working hard and show up for pro day with my body in good shape and have a good pro day.

I look at offensive lineman stances and their splits. I look at what the offense likes to do
consistently and try to pick up small keys that might help me recognize what I am getting  hat play. I also look at how physical the offense is on perimeter plays. I look at how the offense blocks and look for if they have their heads on the swivel which might lead me to shoot gaps and get in the backfield quick.

I really have not compared myself to any player but if I had to pick it would be Ray Lewis because he is my favorite player of all time and I have always tried to play just like him.

Probably ACL surgery in high school; I put in a lot handwork at rehab and in the summer just trying to get my knee stronger and back to how it was before the injury.

I would say a 4-3 defense. I played it in high school and in college and that’s the type of defense I am familiar with.

My instincts and my ability to get off and shed blocks.

Probably wanting to make every play on the field and attacking to much instead of just letting the game come natural to me.

I want to be great. I want to come in and take someone’s job. I set tremendously high goals and I work my butt off to achieve them. I want to prove wrong everybody who ever said I wasn’t good enough and that I wouldn’t amount to anything. I have had a chip on my shoulder most my life which allows me to strive to be great. I have God on my side so go ahead and doubt me. Give me a chance to prove you wrong.

All my older cousins and brother; I wanted to be just like them but better.

The Falcons because I am from Georgia. Ray Lewis is my favorite player of all time because he is great. When you mention the Baltimore Ravens you cant help but to mention number 52.

My grandmother passing away was the most tragic thing that has ever happened to me in my life. The day she died I had a basketball game and my coach told me and my brother we did not have to play that day but we did because we knew that’s what my grandmother would want. Me and my brother  stood out in that game and I knew it was because she was watching over us.

My grandmother, Ray Lewis, and the love of my life Beyonce.

I wouldn’t buy anything. I would put it in my savings account to remind me what position I am currently in and how at anytime that could be my last paycheck ever.

NFL Draft Diamonds was created to assist the underdogs playing the sport. We call them diamonds in the rough. My name is Damond Talbot, I have worked extremely hard to help hundreds of small school players over the past several years, and will continue my mission. We have several contributors on this site, and if they contribute their name and contact will be in the piece above. You can email me at [email protected]mail.com