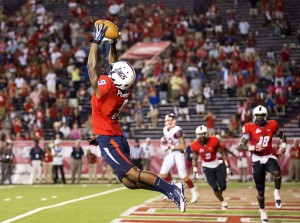 I didn’t have many looks when I was in high school. There were only two schools recruiting me, Newberry College and Tulsa University.

Originally I chose Tulsa University. Several of my teammates were also being recruited and the coach appealed to me a lot; however, I didn’t get accepted due to my grades. I decided to attend Mesa Community College in Mesa, Arizona. I played two years with the Thunderbirds before transferring to South Alabama University.

My goal for my senior year was to help lead my team to a winning season. I wanted to work toward improving my strength and getting off blocks with larger receivers. It’s a weakness that I continue to work towards improving.

No, I haven’t met with any scouts yet.

I consider myself a “Ball Hawk. My ability to position myself between offensive players and the ball enable me to break up passes and ultimately intercept passes. I am also very skilled at transitioning into receivers’. I have exceptional ball skills. I am teachable and versatile. My desire to succeed at the highest level motivates me to work hard everyday to perfect my craft.

I’m a Ball Hawk; I’m always getting after it. I have fluent hips and I get in and out of breaks quickly. I am an enthusiastic playmaker. I can make things happen on what appears to be a broken play.

Some of the toughest players I’ve faced were guys I practiced with. Their high level of competitiveness helped make me better. In junior college the toughest player was Cody Sal. When I transferred to South Alabama University Danny Woodson, a recent transfer from Alabama was a tough player I faced day in and day out in practice. At 6’3 and 295 pounds we’d battle and go at it like dogs. It ultimately made us both better players.

My style of play is similar to that of Brent Grimes of the Miami Dolphins. His ability to make plays on the ball and be a lockdown defender is similar to how I try to defend. He’s a ball hawk like myself.

Leaving home to go to college was very difficult. I attended school in Mesa, Arizona for the first two years. This was essentially across country. I battled with being home sick. I lived by what I call the Triple A’s: accept, adapt, and adjust. I knew what I wanted and I had to accept what I couldn’t change. I adapted to my environment and adjusted my lifestyle to be successful in whatever situation I was in.

I honestly can do it all! Man, zone, zone-man concepts, it really doesn’t matter. My adaptability enables me to be successful in any system.

I struggle getting off blocks for bigger receivers. My size is a major disadvantage. I’m 5’9 and 180 pounds, which is relatively small for my position however I won’t let that determine my success. I am currently training at D1 sport in Greenville, SC. I see my weaknesses and I am working to improve by building strength. I am working with bigger receivers to improve strength and getting off blocks.

I am very talented on and off field. I’m a smart player with a high football IQ. I am consistent on and off the field. I uplift my teammates and challenge them to be the best players they’re capable of being. I also hold myself to a high standard. I have high expectations for myself as a man and as a member of your organization. My go-getter attitude makes me a fighter. I will grind it out to be the best.

I really admired my grandmother, Beatrice Pearson. She raised me and acted as a mother. She equipped with all the resources necessary to be a successful man. The lessons that she taught me prepared me for life. For those reasons she’s my role model.

I don’t have a favorite NFL team. I enjoy a good competitive game. My favorite player is Brent Grimes. His story is similar to mine. He played at a small school and worked his way up. This says a great deal about his character. He worked hard and allowed his athletic ability to speak for itself.

My grandparents raised me. When I was 10 years old my grandfather passed away. It was a very difficult time in my life. It was equivalent to losing a father. While some break in the face of adversity, I saw it as motivation. I used football as an outlet. All the anger and pain I felt was used as motivation on the field. I not only want to be a great football player, but also a great man. That’s what my grandfather wanted and that’s what I’m working toward.

Brent Grimes would top my list because he’s my favorite NFL player. I’d also include Champ Bailey. He’s been in the league for a long time. I think it would be interesting to hear some of his stories. As a young player looking to break out in the league, I think he would have great knowledge and advice to share. Lebron James would be the final person I’d include. He’s a dynamic player! I’m a fan of his game.

What will be the first thing you buy with your check?

I think I’ll probably by a car. A black on black BMW 745 sounds pretty good!