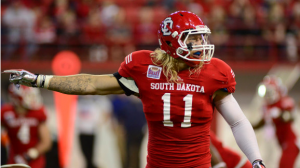 Draft Diamonds Prospect Interview: Tyler Starr, LB, South Dakota
Tyler Starr has become one of my favorite players in this draft, because his will to never quit. When I was at the East/West Shrine game, I had one scout ask me where I found the long haired speed boat.  I honestly did not know what he was talking about until he pointed at Tyler.  The scouts all had great things to say about the former stand-out FCS linebacker.  Tyler will be at the NFL Scouting Combine and I have a feeling you will watch his stock rise.  Highlights of Tyler Starr
How many teams were recruiting you out of high school?
-Only a few, University of South Dakota, Northern Iowa, and University of Sioux Falls
Where did you choose and why?
-I chose the South Dakota because it was close in distance and I felt like I could make an impact early.
What were your goals for your senior year?
-All-American, Make the Playoffs
Have any scouts met with you, and if so what are they saying?
-Yes, Keep working hard and perform at the combine and pro day
At your position, what separates you from the others?
-My versatility to do multiple things as well as relentless effort and intelligence.
Tell us what you look for when breaking down film?
-I look at top personnel, top plays, blocking schemes, stance give hints, tendencies, and what are the strength and weaknesses of my direct opponents.
Who was the toughest player you have ever faced?
-The Offensive tackles for Wisconsin my Soph. year.
If you could compare your play to one person in the NFL who would it be?
Aldon Smith, and Clay Mathews
What was the biggest obstacle in your life you had to overcome, and how did you overcome it?
-Probably becoming ineligible my 2nd year in college and becoming a mature young adult early to raise my son and get back on the field. I dug deep and never gave up using my family and inner drive to get back on my feet.
What system fits your style of play the best?
One that gets me on the field. I truly believe I can play 3-4 outside linebacker, Sam linebacker in a 4-3 or DE. I also believe I am capable of playing TE. I’ll do whatever it takes to play the game of football for as long as I can.
What is your biggest strength?
My drive to be great
What is your biggest weakness?
Trying to do too much
If I were a GM and gave you a second to sell yourself, what would you say?
PASSION, I’m very passionate
Growing up, who was your role model?
My Uncle Jeff Kruse
Who was your favorite team and player in the NFL and why?
DeMarcus Ware, A legend at his position.
What was the most tragic event that ever happened in your life and how did you overcome it?
-Having to sit out a year of football. Took my aggression and turned it in to a positive. Made good choices that lead to great things.
If you were to have dinner with three people dead or alive who would it be?
-Martin Luther King, Tony Dungy, Pat Tillman
With your first paycheck what would you buy?
-A Savings account for my son
Related TopicsNFLnfl draft 2014 tyler starrNFL Draft Tyler StarrNFL Tyler Starrnfl tyler starr prospectTyler StarrTyler Starr nfl draft prospects