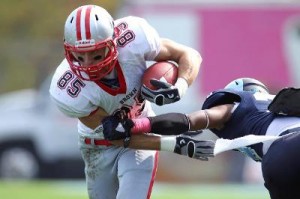 Brown University because of the strong academics.

Pre-snap tendencies giving away a roll/adjustment in coverage or blitz.

Hand or sideline signals indicating a specific blitz or coverage.

Which offensive plays/schemes were used effectively.

Play calls based on D&D.

Dion lewis when he played for Blair Academy before going to Pitt.

Sidelining injury. I overcame this obstacle through focusing on what I could do in the present to benefit my future instead of dwelling on the past and the opportunity lost.

A pro-style system–balanced pass/run. This system best fits my style of play due to my effectiveness in both run and pass situations.

A second? “Watch my film.” If I had 10 seconds…”Given an opportunity, I will be a successful player and contributing member of your offense because the consistency in which I get the job done. I may not do it in a flashy way, but the sticks will move…week in and week out.”

Who is/was your favorite team and player in the NFL, and why?

Julian Edelman–he relies on his toughness to succeed in the NFL.

The passing of my Great Grandfather Morris Kaplan. I overcame his death through the support of family and writing down what he meant to me and speaking at his funeral.

Pay my agent back for my combine training/a nice pair of B-Ball shoes for my little brother.