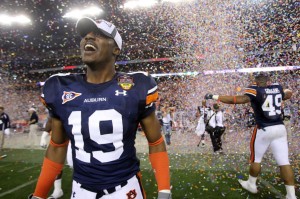 Over fifteen teams were approaching me. Florida, South Carolina, Oregon, Florida State, Ole Miss, Arkansas, UGA, Iowa State, Georgia Tech, and East Carolina are just a few of the schools that were recruiting me.

I chose to attend Auburn. It was in the SEC and they were coming off of a mediocre season. They had a great recruiting class. When meeting with the coach, we discussed the possibility of winning a national championship. His outlook and plans for the season won me over. Alabama was also a convenient meeting point for my family. My mother lived in Atlanta, Georgia, while my father and the rest of my family resided in Tallahassee, Florida.  It was a middle point for my family to travel and see me play.

First and foremost I wanted to have a winning season. I wanted to beat Bama. Ultimately I wanted to get back to compete for a national championship.

I haven’t met with any scouts yet. They’ve been contacting my coach.

I’m smart. In this game that’s really important. I’ve played both offense and defense, which makes me understand the mindset of the opposing players. My versatility is beneficial because it allows me to play multiple positions effectively.

I make smart plays. My ability to play off and pressure the defender is extremely important. I do well with transitions. While looking at my film you’ll see the versatility in my style of play.

Johnny Manziel is a hell of a player. He’s an athletic quarterback, which put the pressure on the defense. The energy and excitement he brings to the game can be tough as an opposing player.

I think my style of play is most similar to that of Charles Woodson. He played corner & safety, which is similar to me. I played multiple positions both on offense and defense.

The transition from high school to college was extremely tough for me. I went from being the man in high school to being a guy on the team. I also battled with being homesick. The pressures of college led me to question if I loved the game enough to fight through. After much evaluation, I realized this is what I wanted and I would do whatever it took to succeed. In order to be successful I had to check my ego at the door and put my pride to the side.

I am pretty versatile and I can adapt to many systems. I believe man coverage fits my style of play best.

I think my biggest strengths would be my high football IQ, my versatility as well as my adaptability.

I am extremely hardworking and diligent. I focus on improving day by day. I look to make the organization better

I looked up to Mike Vick. I played quarterback and he was the best dual quarterback in the league at the time. Everyone loved Vick. I admired his dedication to perfecting his craft.

I don’t have a favorite NFL team. I typically go for the Florida teams out of support for the home state. I just enjoy a good regardless of who’s playing. My favorite player is Mike Vick. He’s so talented it’s crazy. He was a popular player especially during my developmental years.

It was really difficult to cope with the death of one of my teammates. He got killed at a party shooting. Time was the best coping mechanism. This tragedy allowed me to have a greater appreciation for life. I channeled the negative energy to do positive things on the field.

I would probably choose Lebron James because; he’s one of the most dynamic talents in sport. I would like to speak with Dr. Martin Luther King Jr. to discuss his experiences and outlook on the current state of America. My final dinner guest would have to be the beautiful Lashontae Heckard simply because she’s gorgeous.

I would repay my mother’s student loans. Education is extremely important to my entire family. For all that she has sacrificed for me, it’s the least I could do.