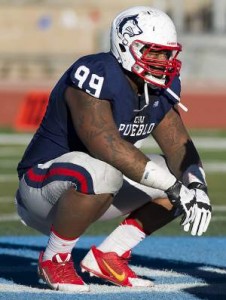 Draft Diamonds Prospect Interview: Mike Pennel, DT, Colorado State – Pueblo
Mike Pennel was an under the radar guy that blew up after a tremendous JUCO career where he landed a scholarship to play for Arizona State. The 6’5, 360 pound defensive tackle only played in 5 games before transferring to Colorado State-Pueblo.  The one thing you cannot teach Mike Pennel is how to clog a lane.  The monster D-Lineman shuts down the middle of the field, which earned him an invite to the NFL Scouting Combine in Indianapolis. SENIOR HIGHLIGHT
How many teams were recruiting you out of high school?

Zero, I did not qualify out of high school!

Went to Scottsdale community college, chose it because the coach Doug Madoski had a vision for my future and I believed in it.

Get recognized, go undefeated, and change my mentality.

Met with lots of scouts, they love my size, athleticism, and potential.

My aggressiveness, speed, and quickness.

The o lineman’s tendencies so I can capitalize on there weaknesses.

I honestly believe I haven’t faced him yet.

Not graduating high school, coming out of junior college, and transferring from D1 to D2

I love the 4-3 but playing nose in the 3-4 works as well. I pride myself on my versatility.

Strength at the point of attack, my get off, and my film study before games.

Technique would love to improve that.

I haven’t reach my potential yet, when I do I’ll be a top lineman in the NFL.

Kansas City Chiefs, I like Kris Jenkins and Deacon Jones. Love there style of “directed aggression”

Not playing at ASU, had some issues with the coaching staff. They made me feel like I wasn’t good enough to play football and it really had me depressed to the point where I wasn’t going to play football anymore. I overcame that by the support of my mother and family and transferring to Colorado State University-Pueblo. I was fortunate enough to get a fresh start and take advantage of it.

Whatever my mother wants. House, car, or clothes. Doesn’t matter she deserves it.