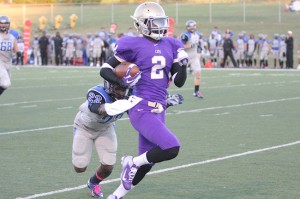 Joc Skinner has great ball skills and NFL scouts have fallen in love with the big corner that possesses an Power Stick. The kid can light people up, and with his big play abilities I would expect Skinner to be in the NFL come next season.  Skinner could be the second Bethel player in the NFL. A few years ago the Buffalo Bills drafted Mike Jasper.  Joc’s Highlight Film

Only one team recruited me out of high school

What are your goals for your senior year?

Become an All-American and lead the conference in interceptions

Yes I have met with a few scouts. They are just asking what kind of corner you see yourself as. Over the years you have been here, what do you think you have improved most on?

Understanding the scheme of the defense and just having a instinct of where the ball is going to be.

My biggest obstacle was wondering if I was going to be able to play football again coming out of high school. Not having any offers and it was coming up on the time to graduate. I just kept my faith in God and knew he would make a way. Right after graduation Willie Tillman, former DC at Bethel University, came to my home and made an offer on the spot.

I’ve played in various systems while being here at Bethel, but I would have to say a zone based style.

Being a student of the game and being technique sound

I am a dedicated student of the game and willing to do whatever it takes to not only better me but also the players around me to get the job done.

Finding out that my oldest brother Terrell Skinner was hanging up his cleats. Growing up I looked up to him and wanted to be like him. I would watch his games in high school and college, then try to go out and imitate exactly what he did or even better. This experience just makes me want to pick up where he left off and take it to another level.

Pay for a vacation get away for my parents.