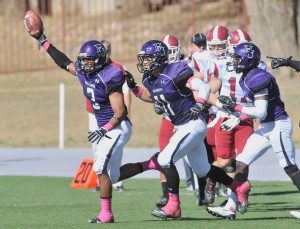 Draft Diamonds Prospect Interview: E.J. Woods, DB, New Mexico Highlands
How many teams were recruiting you out of high school?
24 teams Top 10 UCLA, Texas A&M, Oregon, Washington, Florida State, USC, Colorado, University of Arizona, and CAL
Where did you choose and why?
I chose UCLA because I am from Los Angeles. UCLA was my first verbal offer my Sophomore year in High School. Another major reason, I chose to go to UCLA was because my mother was incarcerated at the time. I wanted to be able to visit her any time I was available and I wanted her to be able to watch my games on TV.
What were your goals for your senior year?
My goals for my Senior year in college were to lead my team to a Conference Championship, obtain first team All-American Honors, and to complete my Business Degree.
Have any scouts met with you, and if so what are they saying?
I have met with one scout from the Oakland Raiders, he told me to prepare myself for Pro Day and to keep up the hard work.
At your position, what separates you from the others?
The athletic abilities that separate me from other individuals are my memorable hard hitting tackles, athleticism, speed, and high motor. I am an all around athlete that can play a variety of positions such as corner, safety, and running back.
Tell us what you look for when breaking down film?
When I watch film, I constantly watch the quarterback’s tendencies, their hand signals, personnel and their route concepts on specific down and distance. I also focus on my opponents strengthens and weaknesses because I never want to underestimate my opponent.
Who was the toughest player you have ever faced?
The toughest player I have ever faced was Darrell Scott from Moorepark High School because he was the biggest, fastest, and most explosive player I have ever played against.
If you could compare your play to one person in the NFL who would it be?
The one person I would compare myself too in the NFL would be Ronnie Lott because of his unique athleticism and hard hitting ability. He also could cover when he needed too.
What was the biggest obstacle in your life you had to overcome, and how did you overcome it
My biggest obstacle in my life was being homeless. I was able to survive this tough time in my life because of my three best friends Donavan Carter, Josh Smith, and Ricky Marvery. They allowed me to sleep in their cars, couches, and floors and even sometimes there beds if they weren’t there. They also feed me with their own food money. Even though, I was depressed and scared for the future, they still pushed me to work out on the field and in the weight room with them every day.
What system fits your style of play the best?
I am versatile and feel as if I can play in any system.
What is your biggest strength?
My biggest strength is my off the edge pressure and nose for the ball.
What is your biggest weakness?
My biggest weakness is being over aggressive and anticipating certain routes.
If I were a GM and gave you a second to sell yourself, what would you say?
I have dealt with tremendous amount of  adversity in my 24 years of life and I still haven’t given up on my dream of being a professional football player and role model in my community.
Growing up, who was your role model?
My role model growing up was Kobe Bryant because he was the most dominant basketball player in the league and his determination to always be the best is what made me admire him the most.
Who was your favorite team and player in the NFL and why?
My favorite team is the Cleveland Browns because my mother is from Ohio and she told me that the Brown had the most loyal fans and the coolest jerseys. Since then, I have been a diehard fan. My favorite player in the NFL is Kam Chancellor from the Seattle Seahawks because of his leadership, modest personality, and his aggressive play.
What was the most tragic event that ever happened in your life and how did you overcome it?
The most tragic event in my life was the recent passing of my father Edmund Keith Woods Sr. My father had a constant battle with Diabetes his entire life. He went from being a 325 pound man to an 185 person I didn’t recognize. He was advised by the doctors to have back surgery last June. After waking up from surgery, he realized he was a paraplegic and had to stay in the hospital until he healed. While at the hospital, he caught pneumonia leading to his death February 2, 2014. I have not overcome my father’s death and I still struggling with his passing but I know I will make him proud at my regional combine March 22, 2014.
If you were to have dinner with three people dead or alive who would it be?
I would have dinner with Oprah because she had a troubled adolescence in a small farming community to now having her OWN network. I also admire her ability to give back to the community that helped her become who she is. Next, Donald Trump because of his work ethic and money management skills. Lastly, Mike Tyson because he dealt with adversity and overcame all odds to be the youngest heavyweight boxing champion of the world.
With your first paycheck what would you buy?
When I receive my first paycheck, I am going to donate some of my earnings to the American Diabetes Association and AutismSpeaks Association because my father just recently passed away from Diabetes and my very close friend suffers from Autism.
Related TopicsE.J. WoodsE.J. Woods 2014 NFL DraftE.J. Woods NFL Draft Prospects 2014E.J. Woods NFL ProspectNew Mexico Highlands E.J. WoodsNFL Draft E.J. Woods